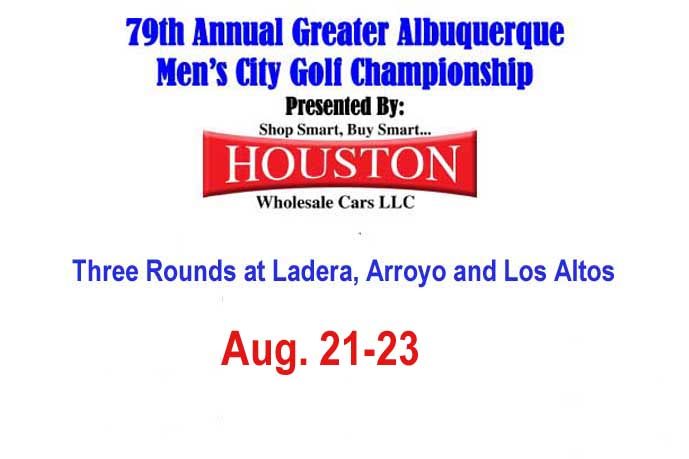 The cst is $180 per player or $130 for holders of a seven-day City of Albuquerque regular annual pass. Carts are not included in the entry fee.

The 79th annual event, sponsored by Houston Wholesale Cars, is a flighted event for most players. The city champion is the winner of the gross, non-age-restricted championship flight.

Last year, Miller finished four strokes ahead of Alejandro Armijo, 19, who finished at 9-under. Armijo had started the day one shot behind Miller. Armijo posted rounds of 67-70-70.

Miller, a graduate of Albuquerque Academy, said he dreamed of winning the event since he first played in it at age 14. The event is typically dominated by University of New Mexico Lobo Men's Golf Team players.

Entrants should submit their entry fee with cash or check to tournament director Colby Reddoch, director of golf at Los Altos. For a printable entry form, click here.

‘Players may opt to compete in a lower handicapped flight with the approval of the tournament director.

The winner of the championship flight gets his name etched on the the Mark “Ticky” Smith trophy, which tournament organizers named after former Journal assistant Sports Editor Mark Smith several years ago.

In each flight, the field will be cut to the low 50 percent and ties after the first 36 holes. The maximum handicap for the event is 18. Players with handicaps higher than 18 will have them lowered to 18.0.

The first 120 applications received will be guaranteed entry into the tournament. The deadline for entries is Aug. 18.