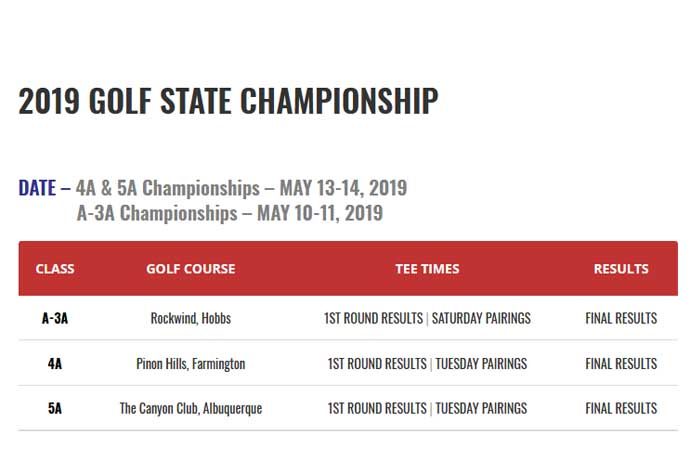 Zamarripa, who carded 6-over for two rounds, finished four strokes ahead of Cleveland High School’s Jacque Galloway, who won the 2019 girls title in the second annual Shootout in the Desert at the Canyon Club last month. Presley Jackson of Deming High School finished in third place at 18-over.

The Cleveland Storm girls won the 5A girls team crown, followed by the La Cueva Bears in second and the Deming Wildcats in third place.

In 4A competition at Pinon Hills Golf Course in Farmington, Aidan Thomas of St. Pius High School won the boys individual title at 6-over, followed by Tay Hwang of the Albuquerque Academy Chargers and Josh Fambro of the Taos Tigers who finished T2 at 8-over.

Taysea Powell of the Artesia Bulldogs took the 4A girls title at 6-over. They were followed in second place by Jessica Osden of the Los Alamos Hilltoppers at 9-over. Isebelle Peralta of the Aztec Tigers at 22-overtook third place.

The Los Alamos Hilltoppers took the 4A boys team title, finishing 34 strokes ahead of the Albuquerque Academy Chargers. The Lovington Wildcats were third.

For a video of Day 1 highlights of 4A action by J.P. Murrieta of the New Mexico Activities Association, click here.

Carisa Padilla of the St. Michael’s High School Horsemen of Santa Fe won the A-3A girls individual title with a two-round score of 10-over. Courtney Andersson of the Mesilla Valley Christian School SonBlazers finished second at 17-over. Harley Richardson of the Socorro Warriors finished third at 22-over.