Dunes Golf & Beach Club: A Link to Myrtle Beach’s Past

4 Ways to Get on the Private Dunes Golf & Beach Club

There are some courses that just fit your eye, and The Dune Golf & Beach Club in North Myrtle Beach, S.C.,  is one of them.

Wide fairways, strategic bunkering, elevation changes that help define the course, and A-1 Bentgrass to Ultradwarf Champion Bermuda greens that leave you scratching your head are just part of the story.

The Dunes Golf & Beach Club played a critical role in bringing Myrtle Beach into the consciousness of the U.S. golfing public. 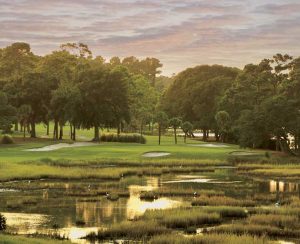 The par 3 12th hole at Dunes Club skirts a tidal marsh and plays between 245 and 150 yards depending on the tees used.

In 2018, Golfweek called it the third-best course in South Carolina, behind Kiawah Island’s Ocean Course and the Sea Pines Resort’s Harbour Town. The year previous, it was No. 39 on Golf magazine’s Top 100 Public Course list.

Private but You Can Get On

The Dunes Golf & Beach club is a private course, but the public can play it in several ways: as a guest of a member; by asking your club’s head professional to call and request a reciprocal round; by booking a tee time through MyrtleBeachGolf.com or MyrtleBeachGolfTrips.com; or by checking with the golf course about booking a package through one of the select Myrtle Beach-area hotels that has a relationship with the course. Greens fee varies from $125 to $250 by season.

Robert Trent Jones, then an unknown course architect, designed the Dunes Club’s course, which opened in 1949. With his son, Rees Jones, he later returned to modify several hole to make it more player-friendly. An extra hole, a par 3, was added between the 13th and 14th holes to make a complete 18 should any other hole be taken out of service for repairs.

Despite a regular schedule of renovations to the course, clubhouse and practice facilities, The Dunes retains the feel of another era, with replicas of past PGA Tour and Champions Tour players’ scorecards in the locker rooms and manicured beds of blooming flowers around the practice green. The understated clubhouse decor conveys an atmosphere of casual elegance for a property that has hosted some of the world’s best golfers and doesn’t need to boast about it.

What I especially liked were the high-school kids I saw walkiing the course late in the day, a sure sign that the people running about The Dunes Golf & Beach Club recognize the importance of bringing new blood to the game. 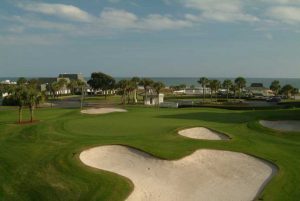 Shots into the par 3 9th at the Dunes Golf & Beach Club are heavily influenced by onshore breezes, while other parts of the course are protected by trees.

Father and Jones Both Worked on the Dunes Club

“This is the coastal Augusta National,” Rees Jones told Golf Course Architecture magazine during an interview in 2018.

“It has a lot of the same attributes,” he told the magazine, highlighting the elevated and contoured greens and sand-flashed bunkers. “It’s by the sea, but it’s really a parkland golf course – the trees are so spectacular. Dad was extremely excited to have an opportunity to build a golf course where wind affected the game, but by the same token the trees offered some protection from the wind.”

Course knowledge is essential at The Dunes Golf & Beach Club, so much so that the starter will warn you about water you can’t see on two holes: No. 10 and No. 18. “Don’t forget, but if you do, be sure to play good balls on those holes for when I pick them out,” he said.

Wind comes into play on the par 3 9th hole, which plays toward the water. From the tee you’ll not see the ocean nor feel the wind and you’ll likely under-club and come up short. 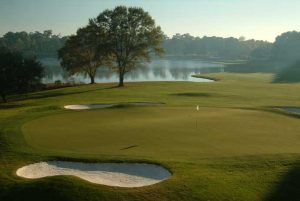 The view of the par 5 13th at The Dunes Club looking back down the fairway.

Water and wind come into play at the par 5 13th hole, nicknamed “Waterloo” to reflect its role in wrecking rounds. Playing anywhere from 465 to 610 yards, the 90-degree dog-leg right around water, Waterloo challenges the player to figure out how much, if any, of the dogleg to bite off. The 13th has a plaque noting that a Chicago golf writer once made a 22 there – without taking a penalty stroke.

Round-wrecker or not, the 13th at the Dunes Golf & Beach Club is just one of 18 fabulous holes designed by a master architect in the early days of his career. Add in a friendly vibe from the staff and superb course conditions and you’re talking about a course that any visitor to Myrtle Beach should be sure to play.