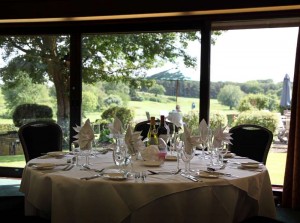 I came across Barnham Broom while researching a piece on 8th Air Force World War II history in nearby Norwich, a wonderful college town with a rich selection of pubs, shopping, antiques and an array of restaurants that continued to surprise even at the end of a four-day stay.

Nearby are Thetford, Seething, Bungay, Hethel — names of rural English towns but also of World War II airfields that descendants of  B-24 bomber air crews likely heard of from their fathers or grandfathers. Most, though not all, of the old fields have been returned to agriculture — vast flat fields which, when seen from the air, bear the tell-tale triangular shape of the standard-issue World War II U.S. Army Air Force bomber base design.

In the middle of this pastoral landscape, not far from Old Buckenham, where the 453rd Bomb Group and actor Jimmy Stewart, a B-24 Liberator pilot, flew missions against the Nazis, you’ll find Barnham Broom, a 46-room resort that is so understated you can almost miss it from the road.

Barnham Broom started as a farm but became an auto destination for Londoners in late 1970s, when the land’s owner faced the prospect of  losing his farm. He built two golf courses. Later came a clubhouse and sports bar, tennis and squash courts, a modern hotel, spa and, most recently, a upscale brasserie featuring continental cuisine, much of it locally sourced.

The quick picture on the golf: The two courses, the Valley Course and Hill Course, are parkland. Both are demanding but enjoyable, walkable layouts with narrow doglegs with plenty of encroaching trees that shut down approaches from the wrong side of the fairway, placing a premium on course management.

The terrain is hilly, even on the Valley Course, as evidenced by the 70-plus foot drop from tee to green on the 137-yard par 3 7th, where, on a breezy day, you might need a Norden bombsight to target the green.

The hotel is modern, its rooms luxurious, yet simply appointed with remarkably functional furnishings. The sports bar and restaurant, perched above the golf shop, is roomy and welcoming. Views at sunset over the course from both the bar and from the upscale brasserie are stunning.

If you long for the quietude of a relaxing park-like, rural location with plenty of walking trails through the countryside that is a destination unto itself, Barnham Broom, north of the A11 and south of the A47,  should be your pick, with easy access for day trips to everything in East Anglia, from Cambridge to King’s Lynn to Holt to Cromer.

If you want the vibrancy and faster pace of a medium-size city (194,000) with an 800-year-old open market and thriving nightlife, continue 30 minutes father east and make your base Norwich.

The 1,000-year-old city hosts dozens of arts, music and culture events through the year, including an annual City of Ales Festival in late May and early June that celebrates local brews. The energy of the city’s college-age population is palpable, especially in spring and summer, when East Anglians celebrate the return of sunshine and blue skies.

Norwich is home to the original Coleman Mustard Shop and Museum, scores of pubs, including two pubs that were bombed in April 1942 — the Fat Cat Pub and Kett’s Tavern — a Jamie Oliver Restaurant, a castle, cathedral, and more antique shops than you can shake a stick at. Near the central open-air market is the Second Air Division Memorial Library dedicated to the the memory of 6,900 U.S Servicemen who lost their lives in the air war against Germany.

(If you’re lucky enough to visit the Fat Cat Pub when local patron Glenn Walley is there, ask him to draw you a map to an intact WWII bomb shelter near the old Hethel Church. Follow it like you’d follow a map to buried treasure for a lovely morning’s adventure and be back in town by lunch).

In Norwich’s city center, your lodging pick should be the Maids Head Hotel, an ancient property where Queen Elizabeth I is reputed to have stayed and where political intrigue was plotted during Oliver Cromwell’s time.

The Maids Head is a full-service hotel with a free car park, wonderfully attentive staff, cozy bar and full English breakfast. It is a handy to everything you’d want to do in Norwich, especially the antique shops on Tombland, Elm Hill and Magdalen streets, with plenty of pubs and restaurants within a remarkably short walk.

All too often, discussion of golf in England is confined to the famous British Open courses and tourism talk focuses on London. But Norfolk and all of East Anglia is out there, waiting for Americans to discover the beauty of the English countryside their fathers and grandfathers once knew.