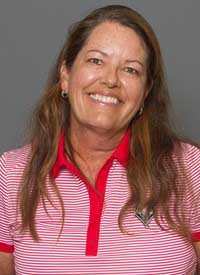 LPGA Professional and Lobo Head Coach Jill Trujillo, along with Associate Head Coach Britney Choy, and assisted by other members of the women’s golf team, will run the women-only clinic from 9 a.m. to noon.

The team will provide golf equipment for women who don’t have their own.

Trujillo, one of the top teaching professionals in the West, is in her tenth season as the head coach.

A sidewalk sale of women’s golf apparel and items from the Lobo women’s golf team  will be held after the clinic. All proceeds from the sale and any donations made during the clinic will benefit the team, Trujillo said.

No pre-registration is necessary for the Lobo golf clinic fundraiser. Interested women players or women thinking about taking up the game of golf simply need to show up at 9 a.m. or earlier at the course, 3601 University Blvd. S.E.

To get to the course, take Exit 220, the Sunport Boulevard exit, east from Interstate 25 and turn right on University, and the golf course will be on the right.

The clinic is sponsored by the Branch Law Firm. In case of inclement weather, the clinic will be held indoors. However, Sunday’s weather forecast calls from sunshine and temperatures during the clinic’s hours starting at 65 and warming to 71, with breezy winds.

The UNM Lobo Women’s Golf Team competes in the Mountain West Conference, which will hold its conference tournament April 16-18 in Palm Springs, Calif.