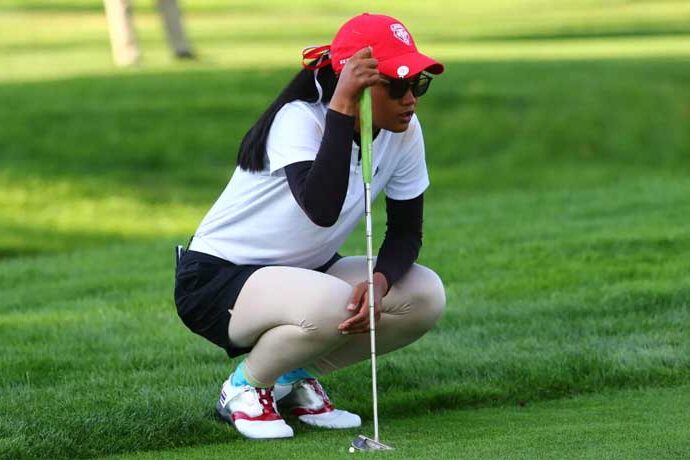 The University of New Mexico women’s golf team finished its season-opener in sixth place out of a highly-competitive 12-team field on Tuesday at the Lamkin Invitational hosted by San Diego State.

Lertsadwattana registered a career-best fourth-place finish on the week. She shot a 73 in round one and shaved three strokes off in round two (70, -2), which she squeezed in just before dark on Monday night. In Tuesday’s third round, she shot a 76 for a three-round total of 219 (+3).

She finished just five strokes behind the tournament’s winner and four strokes out of a tie for second place.

USC clamed the crown Tuesday finishing +16 while its own Allisen Corpuz took the individual title with a final score of 214 (-2). TCU, which entered the tournament ranked No. 22 in the nation, finished tied for second with UCLA (904, +40), followed by Colorado and San Diego State which tied for fourth with a score of 910 (+46).

The Lobos finished just behind their Mountain West rival with a final score of 929 (+65).

Senior Caroline Jansson finished tied for 29th overall with a final score of 233 (+17). She posted a trio of birdies in round three and was followed by sophomore Chloé Lauer and freshman Myah McDonald who tied for 38th with a score of 240 (+24).

McDonald in her collegiate opener shot an 82 in round one before finishing the tournament with two straight rounds carding a 79.

After a rough start in the first two rounds, junior Kamie Hamada cut 17 strokes off of her round two score to finish strong with a score of 77 (+5) in round three.

The Lobos are scheduled to return to action Feb. 15-16 when they travel to Las Vegas, Nev., at the Rebel Beach Invitational hosted by UNLV and Long Beach State. For full results of the Lamkin Invitational, click here