Hobbs’ Rockwind: a Muni Where Kids Can Spend the Summer

The City of Hobbs, N.M. has turned a piece of ironing board-flat desert into the kind of daily-fee muni that a kid like Fred Couples could play every day of every summer for years. 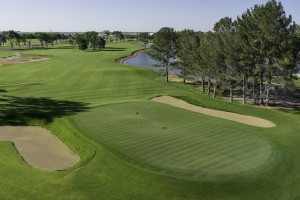 Couples should know. The 15-time tour winner and World Golf Hall of Fame inductee spent every day of every summer as a kid at Jefferson Park Golf Course in his hometown of Seattle. “This course is a fantastic course where the kids of Hobbs are going to have a ball,” Couple said at the opening of the Rockwind Community Links Golf Course.

The May 23 opening Couples attended was just the start. Four days later, Rockwind hosted its first charity event. Playing were Lee Trevino, Jim Colbert and Natalie Gulbis. The opening of Rockwind was a big deal for Hobbs, which is diversifying its economy and shedding its old image as a dusty oil patch town.

Built on the site of the former Ocotillo Park Golf Course, Rockwind was designed by 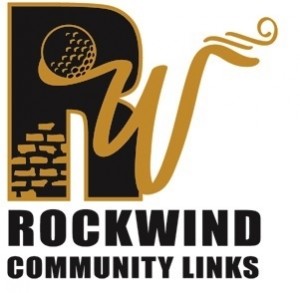 Scottsdale architect Andy Staples, who used soil removed from a new 5.2-acre irrigation lake to build brows and berms to add elevation change and visual interest to the 224-acre property. A stream fed by the irrigation lake meanders through the course. Rock walls built from native caliche rock lining some holes are evocative of courses on the west coast of Ireland.

Kept intact were hundreds of mature trees planted in 1955 when Ocotillo Park opened, which gives Rockwind the feel of a mature golf course, and shade and definition not often found in Southeastern New Mexico. 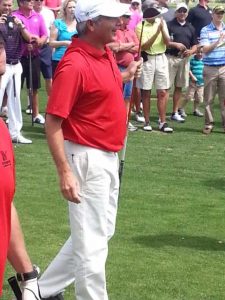 The resulting property is a 27-hole facility with a 7,102-yard 18-hole course and a 9-hole beginners’ course – “Li’l Rock” – with holes ranging in length from 35 to 185 yards.
Because of its flat terrain, the only defenses Rockwind offers against low scoring are its hidden fairway bunkers and devilishly difficult greens, some of which have two feet of elevation change from one section to another. Surrounding the course are walking and bike trials, and the adjacent park land is home to red tail hawks, golden eagles, javelina, quail and gray foxes.

“We believe Rockwind will be the focus of our community and we’re investing heavily in golf for our youth,” said Hobbs Mayor Sam Cobb.

The name Rockwind comes from two realities of Southeastern New Mexico – the ever-present wind and the caliche rock that lies a few feet below the topsoil. Superintendent Matt Hughes said Staples trucked in two feet of soil and sand to overlay the old Ocotillo course. 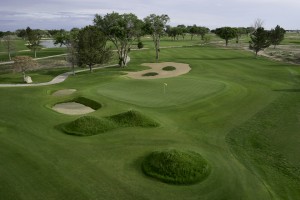 The $12 million Rockwind renovation was a big step for Hobbs, population 45,000, which rode a wave of rising oil prices to become the second-largest economy in New Mexico last year – second only to Albuquerque. The city did not sell bonds to build Rockwind; it paid cash. “We’re investing in quality of life here, and we’re telling the world we want people to come and live and prosper here,” Cobb said.

As to oil’s boom-bust cycle, Hobbs has learned its lesson from past busts. The drillers and well-service companies kept an eye on spending and debt during last year’s boom and have weathered this year’s decline in prices. “But to tell you the truth, we’re drilling so efficiently, the cost of production here is $13, so we’re still making money even if oil is at $35,” Cobb said.

Dan Vukelich, a member of the Golf Writers Association of America, is the editor of ABQ Free Press in Albuquerque and newmexicogolfnews.com.

Where: Hobbs, in the heart of New Mexico’s oil patch in Southeastern New Mexico, is four miles from the Texas state line and 71 miles northwest of Midland-Odessa.

Where to eat and stay: The Zia Park Casino Hotel is less than five minutes from Rockwind. Top restaurants include the Cattle Baron steakhouse and Pacific Rim, an eclectic mix of sushi, seafood and steaks.

What’s nearby: Carlsbad Caverns National Park is 70 miles southwest of Hobbs. Zia Park has horse racing September through December. Hobbs is a center of soaring, or glider flying. The Soaring Society of America is based in Hobbs and offers $139 introductory flights.