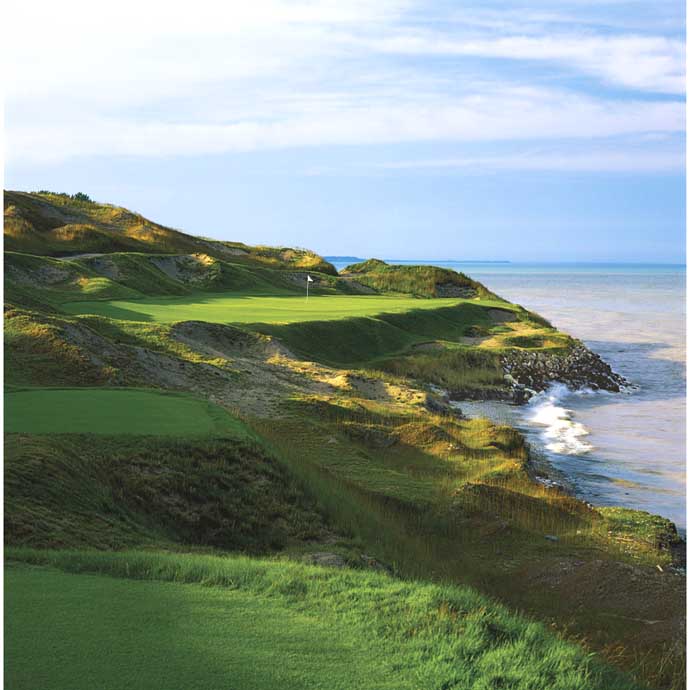 Herb Kohler Jr. made sure the Kohler Resort is a world-class, fourl-season resort for golfers and foodies.

Kohler, chairman of the Kohler plumbing fixtures company and a golf aficionado, developed his golf property in Kohler, Wis., into a four-season luxury resort for golfers, for foodies, for families and for non-golfing folks who just want to be pampered.

“What makes it unique is that our guests who buy tickets get to actually eat what the chefs are doing in the demo,” said Leslie Stachowiak, Destination Kohler spokeswoman. “Most other festivals just have the guests watch the demo and drool.”

Located near Sheboygan, midway between Milwaukee and Green Bay, Kohler is about two and a half hours by car from Chicago. Milwaukee’s Billy Mitchell Airport is 60 miles away.

The premier golf offering at Destination Kohler is Whistling Straits, ranked No. 3 by Golf Digest on its U.S. Top 100 You Can Play list. It has hosted three PGA Championships and a Senior U.S. Open. In September, it hosts the 2020 Ryder Cup. Its design was Pete Dye.

The course runs along the shore of Lake Michigan through dunes built by Dye with 7,000 truckloads of Kohler’s imported sand – 2.8 million pounds in all. According to one caddie, the sand-hauling went on 24/7 for more than a year.

Eight of the Straits’ holes are on the lakefront and all 18 have lake views. The 7,790-yard-long course has 500 bunkers and just as many waste areas. It was in one such bunker on the 72nd hole of the 2010 PGA Championship that Dustin Johnson grounded his club and forfeited his chance at winning his first major.

The Straits’ companion course is the 7,201-yard Irish Course (No. 43 on Golf Digest’s list). It shares the Straits’ linksy character but not its lakeside drama. Just four of its holes offer views of Lake Michigan.

Lodging at Kohler comes in a variety of flavors, including a backwoods cabin, a riverside cabin and a multi-level home, but the American Club and the Woodlake Inn are where most golfers gravitate.

Golf Magazine recently tapped Kohler’s American Club as the No. 2 golf resort in North America in the luxury category, one spot behind Pebble Beach Golf Links. The AAA five-diamond American Club, a stately brick and slate-roofed building, began life in 1918 as a dormitory for immigrants working at the Kohler factory across the street. Its rooms are richly appointed in the Victorian style of the time.

The American Club has five on-property dining options, including the Immigrant Restaurant, where jackets are required for men. The hotel’s Winery Bar has a scotch menu that runs for pages and lists a 1.5-ounce glass of 50-year-old Balvenie at $3,295.

“We serve maybe two a year to people who want to say they did it,” a bartender said.

The nearby AAA three-diamond Inn on Woodlake features modern rooms as well as multi-bedroom suites with private baths. Each suite adjoins a common living area. Free shuttles ferry guests between and among the hotels, shopping and all four golf courses.

Herb Kohler Jr. got the non-golfing spouse thing a long time ago. For non-players, activities include spa treatments, shopping, garden tours, a visit to a local Kohler family-endowed art museum, plus shopping, dining and pub-crawling in nearby Sheboygan’s revitalized downtown.

The Kohler Design Center, a short walk from the two hotels, is a 36,000-square-foot showcase for the latest and fanciest Kohler plumbing fixtures. Take the tour and you’ll see showers with more showerheads than you’d imagine was possible. Tours of the Design Center and of the factory where Kohler manufactures plumbing fixtures are free.

The Shops at Woodlake, also a short walk from the two hotels, feature a variety of restaurants, a cigar and spirits store, men’s and women’s clothing stores, a coffee shop, food market, chocolatier, yoga studio, cycling spin center, and even a maternity shop.

Dan Vukelich, editor of New Mexico Golf News, is a member of the Golf Writers Association of America and the Golf Travel Writers of America. Reach him at dan@newmexicogolfnews.com a version of this article originally appeared on the Morning Read’s Where to Golf Next website.