(MESQUITE, Nev.) December 10, 2011 — Imagine Elephant Butte or Socorro, N.M., with more than one great golf course and a bunch of value casinos and you have Mesquite, Nev. — the working man's Vegas. 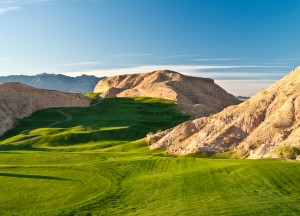 Don't get me wrong. There are plenty of reasons to spring for a trip to the original Sin City, but golf value generally isn't one of them. Eighty miles northeast of the Vegas Strip, though, you'll find plenty of wow for your golf dollar in Mesquite, a city full of regular folks happy you're there and eager to make you want to come back.

Both Mesquite — and neighboring golf-rich St. George, Utah, just over the state line — are a hefty 10- to 11-hour drive from Albuquerque or Santa Fe, but there's plenty to see along the way: Flagstaff, the Grand Canyon, Hoover Dam and Las Vegas itself, for starters.

If you're not into sightseeing or your golf buddies are pressed for time, opt for a 1-hour 15-minute Southwest flight from Albuquerque to Vegas' McCarran International, followed by a 70-minute blast up Interstate 15 by rental car.

An annual winter meeting of golf writers usually held in Scottsdale was moved this year to Mesquite to show off Mesquite's and St. George's golf offerings. Leaving aside the area's best-known property, Wolf Creek Golf Course, which you've surely seen on TV, here are some first impressions of layouts that command $150 to $200 at peak season in early spring, but far less off-season:

Coyote Springs Golf Club, in the middle of UFO nowhere north on U.S. 93 , has all the hallmarks of a Jack Nicklaus design — plenty of tough pin placements, plus devilish sand and grass bunkers that guard elevated greens so, surprise, mishit approaches end up in deep hollows.

Conditions are immaculate at this formidable course, which plays 6,215-7,471 yards. Building Coyote Springs cost a whopping $42 million, thanks to infrastructure that could withstand a nuclear blast.

Eerily, the course doesn't have a single home or anything else anywhere around it. It sits all alone at a T intersection in the desert — reminiscent of Charles Keating's ghost-town-like Estrella Mountain Ranch back in the 1990s before it took off. Just 55 miles north of the Strip, Coyote Springs is so isolated, auto tourists driving in from the north regularly limp into his golf shop asking to bum enough gas to make it to Vegas, says Director of Golf Karl Larcom.

Coyote Springs is well worth the high-speed run north to play top-shelf golf for a fraction of what you'd pay if you stayed in town. Contact Coyote Springs.

Falcon Ridge Golf Course, smack in the middle of Mesquite, is a tough roller-coaster layout with vertigo-inducing elevation changes, spectacular vistas and wild greens across 4,423-6,546 yards. Play and be pummeled by it once and you'll want to return for payback.

Coral Canyon Golf Club, just outside St. George, Utah, is a dramatic 35-minute drive from Mesquite through a steep canyon carved by the Virgin River. This Keith Foster design has all the beauty of a Tom Fazio work, with the same gorgeous visuals from the tee box — menacing fairway bunkers that look the ocean breaking over a distant reef. Solution: Consult the yardage book and pick a line to one you can't reach.

Coral Canyon, like the rest of St. George, is a playground for vacationing second-home owners from Salt Lake City. It delivers the goods with great conditions across 4,125-7,200 yards, broad landing areas, honest greens, great service and a playability you couldn't get tired of if you played it every day for a month. Contact Coral Canyon.

Conestoga Golf Club, (5,017-5,272 yards) a Troon Golf-managed course within the Del Webb Sun City Mesquite community, has that little bit extra in service and conditioning you expect from Troon, plus massive stonework retaining walls that must have kept an entire Caterpillar plant busy for months.

The course itself, perfectly groomed and ready for a TV event, was built by Gary Panks in the same straightforward style as Panks' Twin Warriors Golf Club design at Santa Ana Pueblo, with the exception of several canyon-following holes on the front, notably the Par 5 6th, where topography dictates several blind shots — one involving a fairway-ending cliff you'll need to drive forward to see and comprehend the first time you play. Contact Conestoga.

Golf Mesquite began developing at about the same time New Mexico golf did back in the late 1990s and early 2000s. Like our own casino-owned desert courses, several of its nine golf properties have matured into premier value destinations that keep bringing back buddies' golf trips year after year.

Bryce CanyonNational Park and Zion National Park are just up road from St. George. Zion's Virgin River is a world-famous hiking destination where sheer canyon walls tower hundreds of feet, and the river bottom, where you actually walk in shallow water, can narrow to barely more than shoulder-width.

The Mesquite Amateur, now in its 10th year, attracts up to 600 golfers from around the world in flighted competitions May 28-June 1. Three rounds of golf and four nights of lodging cost $475. Don't delay, though, because it typically fills up by the March 31 deadline. Contact the Amateur.

Tucson Golf: Winter Golf without Spending Too Much Green 18287