At daybreak of my first day at Red Ledges, I was lazing in the king bed of my cabin, one eye open, watching fingers of daylight reach into the trees outside the bedroom window when they walked by – three deer: an eight-point buck, a doe and a fawn.

As they moved out of frame, dapples of sunlight highlighted the red in their fur. Then they were gone, even before the thought could form, “So, this is what living at Red Ledges is like.” 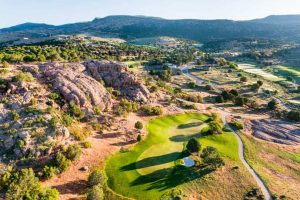 Its routing means you usually see only the hole you’re playing at Red Ledges.

Red Ledges, an upscale community south of Park City, Utah, is named for the red-hued rocks that form palisades, ridges and ledges throughout its 2,000 acres. Its centerpiece is the 18-hole Red Ledges Jack Nicklaus Signature Golf Course, which I was there to play, as well as a par 36 12-hole “golf park,” a concept the Golden Bear believes may hold the future of the game.

Having lived in the West since leaving Chicago in 1981, I’ve become used to dramatically beautiful places, but the Heber Valley, less than an hour from the Salt Lake City Airport, is smack-dab in the middle of some of the most spectacular high-desert terrain I’d seen in a long time.

Nicklaus’ 7,653-yard championship course at Red Ledges is a visual treat that rises and falls over nearly 700 feet of elevation changes. As it traverses 100 turfed acres, the green of the fairways contrasts with the red rocks, while in the distance the gray crags of the Wasatch Range frame a brilliant blue sky that is the norm rather than the exception here in the West. 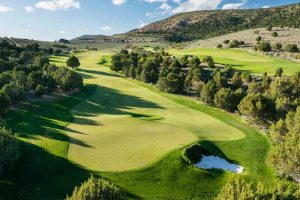 In 2009, Golf magazine named Red Ledges the best new private course to open in the U.S. that year. In 2012, Golfweek named it to its list of the Top 100 U.S. Residential Courses. Every year since 2010 it’s been named the Beehive State’s best golf course in Utah’s “Best of State” rankings.

The entire course is seeded with bentgrass – not just the greens, but all turfed areas. The bentgrass gives the course a superbly manicured look in the closely mown areas and presents a hosel-grabbing challenge in the rough.

The course has five sets of tees. To make the championship course play faster, Nicklaus built the fifth set of tees, the Golden Bear tees, well down the fairway. That makes the average hole about 206 yards long and reduces the course’s length to just over 3,700 yards, which encourages kids who are ready to try the course and eases the difficulty for players with slower swing speeds. 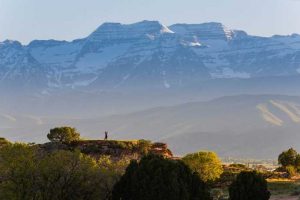 A golfer tees off at Red Ledges with the Wasatch Range looming in the distance.

On each tee, my forecaddie, Matt, who grew up in nearby Orem, laid out the strategy for playing the hole. After hearing the same advice a few times, I piped up, “Let me guess. We’re playing this one left to right,” which is power-fader Nicklaus’ favored orientation. “You guessed right,” Matt responded.

Sometimes, mountain courses can be overly tricked up – 90-degree doglegs, for example, or par 3s that make you think you’re looking through the bombsight of a B-52.

Not at Red Ledges, where Nicklaus was given license by the club’s founders to string together 18 visually stunning holes with as much as 300 yards between one green and the next tee. The result is you rarely see another green or fairway other than the one you’re on.

Red Ledges is a difficult course for a bogey golfer, (blue Nicklaus tees: rating 72.3/slope 141). The steepness of the terrain on many holes adds a third dimension to your shot strategy. At one point during my first round I came to think of my drives as one-cushion bank shots where the ball can roll 60 yards downhill or carom off a canted fairway 20 or 30 yards right or left.

During my second round, I asked Matt to move up one tee box (blue/silver combo, 70.4/140). To my surprise, I had difficulty recognizing some of the holes I’d played only the day before – the views from the various tee boxes (and tee shot strategies) are that dramatically different.  “I could play here every day and never be bored,” I said out loud.

The Area around Red Ledges

Just outside of Heber City, population 15,000, Red Ledges refers to itself as a “four-season community,” meaning it isn’t just a seasonal second-home enclave but a place where multiple generations of families can gather year-round. 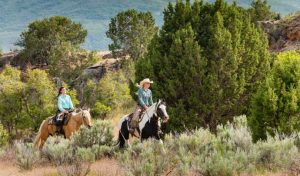 Horsebacking riding, fishing, boating and hiking are all available at or near Red Ledges.

On the drive in along U.S. Hwy. 189, just nine miles short of Red Ledges, I had passed the Deer Creek Reservoir a six-mile-long, 2,965-acre lake popular for its fishing, boating, kite-surfing and diving. Ten miles to the north lies the even larger Jordanelle Reservoir.

Within 20 miles of Red Ledges you’ll find the deep-powder ski havens of Deer Valley and Solitude, and the town of Sundance – venue for Robert Redford’s Sundance Film Festival. Alta and Snowbird, two other ski resorts renowned for champagne powder, are a little more than an hour away.

Within the gates of the Red Ledges community itself lie miles of walking and biking trails. But that’s just the start. Red Ledges and the rest of the Heber Valley are surrounded by the Uinta-Wasatch-Cache National Forest, an 880,000-acre hiking, mountain-biking, fishing and camping paradise.

Jack Nicklaus is on record as saying that 18 holes of golf is no longer the be-all and end-all of the sport. At a time when players are hard-pressed to find time, he felt another approach was needed. 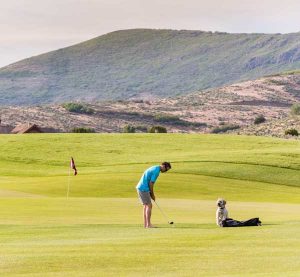 “And while it sounds simple,” Nicklaus said at the grand opening, “the course being 12 holes gives them the option of playing something a little longer than nine holes and shorter than 18 holes. Players can also break up the layout in various ways to customize their experience – from playing as few as six holes to as many as 18.”

Residents often grab less than a full bag of clubs – sometimes just two or three clubs – and walk the course with their families or dogs. John Johnson, Red Ledges’ GM, said members view the golf park “a little bit like we see at St. Andrews on a Sunday in Scotland.”

“It’s the town park,” he said, where on some days more people are flying kites or kicking a soccer ball than playing golf. Disc golf targets are off to the side of each of the 12 greens, which have standard 4¼-inch-wide cups as well as 8-inch cups popular with putting-challenged kids.

Notably, the golf park’s holes, which vary in distance from 107 to 183 yards, are situated in concave bowls so that shots hitting off the green more likely than not will bounce or roll onto the putting surface – another nod to beginners. 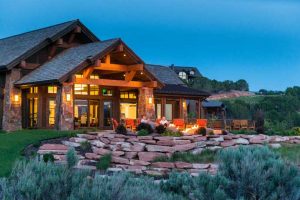 Its developers call Red Ledges a four-season community near some of the world’s best skiing.

Assembled in 30 separate real estate transactions over 40 years by founder Tony Burns, who built the community with his friend, Nolan Archibald, Red Ledges encompasses 2,000 acres. Two-hundred of a planned 1,200 luxury homes, villas and cabins have been built. Eighty-three more homes are under construction and 20 are in the design stage.

Lots for sale in early July on the Red Ledges website started at $195,000. Larger homes listed for resale started at $1.255 million, while a 2,565-square-foot 3-bedroom, 4-bath villa was listed at a surprisingly affordable (for the region) $645,000. Lot owners who haven’t started building are entitled to club membership and access to all facilities.

The 18-hole golf course is stunning. The golf park is fun and innovative. The club celebrates the outdoors through tennis, swimming, horseback riding, walking and biking. The community is plunked in the middle of spectacular national forest land, near water recreation areas, close to some of the world’s best skiing, yet convenient to a major city and airport.

There’s a Jim McClean Golf School, the Cliff Drysdale tennis school and a spa that offers practically any kind of massage you can dream up. Take all that, throw in a casual, family-oriented culture, personalized service and a clubhouse restaurant with gorgeous views, and you have to ask, “What’s not to like?”

How You Can Play Red Ledges

Play at Red Ledges is restricted to members and guests but the community, which continues to develop home sites, offers familiarization tours for people considering building or buying there. Its “Discovery Tour” visit, coordinated by the Red Ledges concierge, includes two nights in one of the club’s luxury multi-bedroom cabins and the freedom to explore golf, tennis, spa treatments, yoga, horseback riding, biking, hiking, swimming – or whatever else the club offers that tickles your fancy. To inquire about a Red Ledges Discovery Tour visit, call (877) 733-5334, email info@redledges.com, or visit the website www.redledges.com.