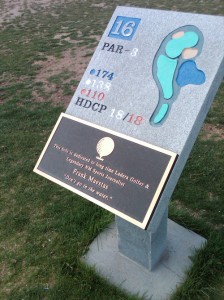 (ALBUQUERQUE, N.M.) April 20, 2011 — It’s been five years since sports journalist Frank Maestas died, and not much has changed at his beloved Ladera Golf Course, where they erected a plaque near the hazard on the 16th hole that swallowed so many of his golf balls.

The tee box is still scruffy. The green still patchy. The nearby fairways pot-holed and sickly.

“Don’t go in the water,” Maestas would say about the 16th when Maestas and his crew would convene each week for skins, beer and sandbagging.

On a solo walking round on an empty course in between wind storms this week, I had plenty of time to think. As I unslung my bag on the 16th tee I came across Frank’s plaque as if seeing it for the first time.

It got me thinking about Frank and the gang he held together for so many years, wondering whether his politically connected crew, had they stayed together, could have persuaded the new administration at City Hall to recognize the perennial lack of accountability at the Parks and Recreation Department, which oversees Ladera and operations at the other city-owned courses.

Back home, I dug out the obituary I wrote in 2006 for Sun Country magazine upon Frank’s death. Here it is again for his friends and comrades (photo courtesy of the Albuquerque Journal):

Less than 24 hours after Frank Maestas died, three players from the Maestas group teed off under leaden skies at Ladera Golf Course on Albuquerque’s West Side, their breath visible in the unusually chilly air.

Whether they didn’t get the news of his death, didn’t pick up the 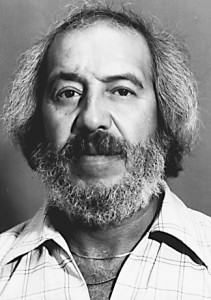 paper that morning or just didn’t care, all was right with the world.

You showed up, you played. Skins, full handicap, low gross and low net. The accounting occurred after the round at any number of nearby liquor establishments, sometimes Pin Seekers, the Gin Mill, Our Place, wherever.

They called themselves the LULAC Country Club, an ironic reference to the longtime Hispanic activist group, the League of United Latin American Citizens. The fact that they played at the scruffiest Albuquerque municipal course, week after week, year after year, was not by accident.

It was their day and it was their course, a regular gathering dating to when Maestas organized the group 18 years ago, said Bob McBride, a lobbyist and one of the regulars.

The LULAC Country Club name was coined by McBride, who despite his name, is Hispanic. “One day early on, I called people to tee, ‘Now on the first tee, Montoya, Maestas, Rodriguez, Montano,’ and I said, heck, it sounds like the LULAC Country Club out here,” McBride said.

The name stuck. Guys would straggle to the course up to an hour before, but you knew the gang was ready to tee off, when Frank, retired sports writer from the Albuquerque Journal, showed up, his beard and wild hair making him resemble a refugee from Texas Chainsaw Massacre, got everyone paired up, got the game outlined, stakes settled, then teed off to lead the field.

“He did everything, from calculating the handicaps to pairing people up to collecting the entry fees,” McBride said.

Even though the group played year-round, weather permitting, at the end of the season, they held the Maestas Tournament, patterned after The Masters, with a red jacket found at Good Will and a trophy awarded to the winner. “We even had tee-shirts printed up that said, ‘The Maesters,’ also named after Frank,” McBride said.