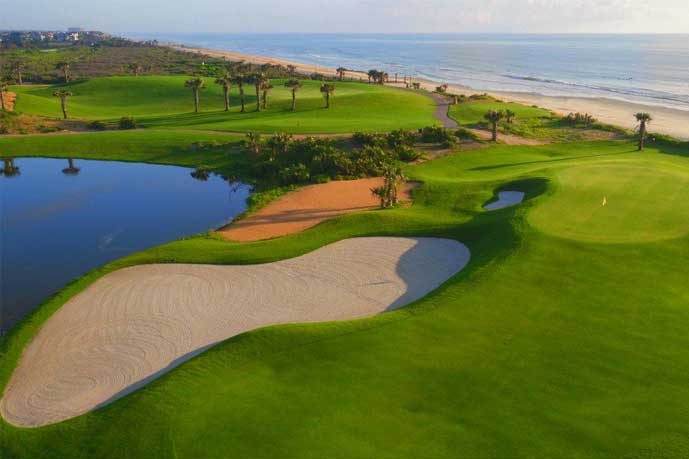 Nicklaus, Watson Courses Are the Draw to Palm Coast, Fla.

It’s never too soon to start planning your winter golf travel, so I’m going to plant this idea in your head now: the Hammock Beach Resort.

This Salamander Resort property, owned by Sheila Johnson, co-founder of the Black Entertainment Network, is a delightful getaway just under two hours north of Orlando.

Towering above the beach in Palm Coast, Fla., the Hammock Beach Resort features two terrific golf courses. Jack Nicklaus designed the Ocean Course and Tom Watson designed the Conservatory Course. More on them in a moment.

But first I want to talk a little about the resort itself. During a visit there last February with the Golf Writers Association of America, I came away with the all-too-rare feeling that the people at this resort enjoy going much further to please their guests than most Florida resort properties.

Lesson One came when my roommate and I couldn’t figure out how to turn on the TV. We called the front desk and a technician in white ovralls arrived in less than five minutes, reset the set-top box and patiently explained how to do it ourselves should it need resetting again.

Lesson Two came after I arrived home and found I’d left a pair of dress slacks hanging in the closet in the hotel suite. After being connected to lost-and-found, I was told, yes, the pants had been found by housekeeping. They were in my mailbox within a week.

For that kind of service and more, Hammock Beach Resort won Golf Digest’s Editor’s Choice Award as Florida’s best golf resort in 2016 and 2018, and it ranks as No. 53 on the Condé Nast Traveler list of top 100 golf resorts.

Hammock Beach’s premier lodging property is a sprawling pastel-colored, 11-story hotel with rooms and multi-bedroom suites of between 700 and 2,300 square feet. The Lodge, a 20-room boutique hotel within a hotel, sits between the main hotel and the oceanfront less than a two-putt from the 18th green of the Ocean Course. Vacation homes and villas are also available for rent.

Hammock Beach has six restaurant-bars, among them the Atlantic Grille, which offers a creative array of tapas and signature entrées with a heavy emphasis on fresh local seafood. There are swimming pools, tennis courts, fitness center, surfing and spa treatments. For boaters, there’s the nearby Hammock Beach Marina on the Intracoastal Waterway.

The Ocean and Conservatory Courses

The golf at Hammock Beach comes in two distinct flavors: Ocean and not ocean. Both choices are equally excellent.

The Conservatory Course, about three miles away, on the inland side of the Intracoastal Waterway, has the linksy feel you’d expect from the “Wee Scotsman” Watson, with mounds and folds that frequently fool you into thinking there’s less room than there actually is.

At 7,776 yards from the tips, the Conservatory is Florida’s longest golf course. Water on one side and and a treeline on the other frame most of the Conservatory’s holes. There are lots of bunkers – 140 of them, actually, plus three sod-faced bunkers thrown in by the man who won eight majors, five of them in Britain.

The Conservatory is named for its dramatic glass-roofed clubhouse. The course hosted exactly one PGA Tour event, the Ginn sur Mer Classic, in 2008. The tournament was named for Bobby Ginn, an aggressive developer who built the resort before cratering financially during the collapse of the Florida real estate bubble in 2009.

.“As it relates to the East Coast in the United States, you are not going to get any better than you have right here,” Jack Nicklaus says on his company’s website.

The Ocean Course hosted two PGA Tour Champions events in 2007 and 2008. The course closed in late 2016 for 13 months after Hurricane Matthew flooded it with salt water, killing the grass. It was resurfaced with a salt-resistant Bermuda hybrid, Platinum Paspalum, and reopened in late 2017.

Golfweek ranked the Ocean Course No. 11 on its list of the best Florida courses in 2018. Before the hurricane, Golf magazine ranked it No. 86 on its Top 100 You Can Play list.

A check of the Hammock Beach Resort’s reservations engine shows the cost of a two-night stay in mid-November for an ocean-view, four-bedroom suite with full kitchen at $808 before taxes and fees. The quoted “Just Golf” package includes a round per player per day on each of the Conservatory and Ocean courses.