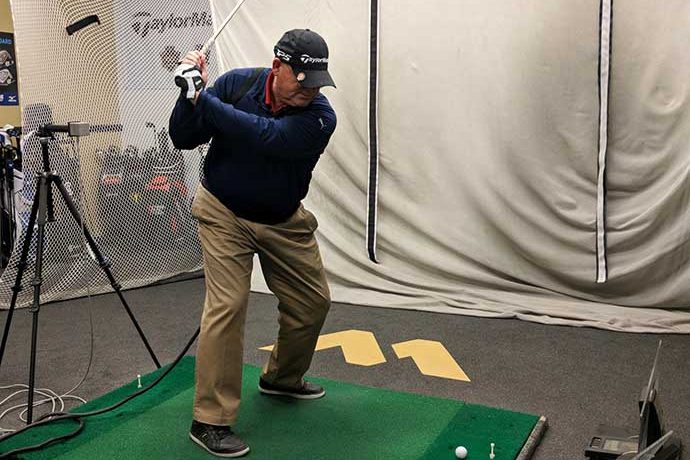 Monty Mills knows a thing or two about holes in one, thanks to his fearless habit of firing at the flag on every par three.

The 61-year-old Albuquerque PGA professional scored his sixth ace on Jan. 13 with a 9-iron from 147 yards on the fifth hole of Albuquerque’s Ladera Golf Course.

“It took 40 years for the first one,” said Mills, who grew up playing Indian Tree Golf Course, a muni in the Denver suburb of Arvada. His first ace came about the time he turned 40 – at No. 2 on UNM North, struck with a 7-iron.

Actually, it seems Mills works with a flag-hunting crew.

He’s a golf coach at GolfTec, a high-tech instruction and club-fitting center in Albuquerque at 419 Mountain Rd. NW, where four people who work there have 18 aces among them.

Nine were scored by owner Mark Crawford. Incredibly, four of those came during rounds played over the years on Crawford’s birthday, Mills said. Talk about birthday presents!

As far as Mills’s record of aces, it also doesn’t hurt that he plays about 150 times a year, generally once a week with students and two other times each week for exercise or in a regular game.

As for the “firing-at-the-pin” thing, Mills said he believes it’s the key to putting the ball into the hole as many times as he has.

“If I have to clear a bunker, I go for the flag. It doesn’t intimidate me,” he said.

“I talked to another really good golfer who’s never had a hole in one and he never goes for the flag,” he said. “He told me he always hits to the middle of the green.”

“I asked him what happens if the flag’s in the middle and he said, he hits either right of left,” Mills said.

As an industry insider, Mills is struck by the impact of technology on his own game.

For his first he ace about 20 years ago, he used a 7-iron; for his latest he hit 9 from about the same distance. “I’m 20 years older but I’m hitting it 15 yards farther with less club,” he said.

Despite his age, Mills still cranks it about 275 yards from the tee.

Mills is a familiar face to many Albuquerque golfers. After leaving the corporate world when Radio Shack was closing stores, including the store Mills managed at Coronado Center, he started working the counter at UNM Championship and Paa-Ko Ridge.

After a few years of that, Mills, who for a long time was a low handicapper amateur competing in local men’s association events (he’s now about scratch), he decided to turn pro. In 2012, became a Class A PGA professional after about about three and a half years.

Attracted by the high-tech swing analysis at GolfTec, he spends about 80 percent of his time teaching the golf swing and the other 20 percent fitting clubs.

GolfTec charges $125 for an initial swing evaluation. Lessons start at $75 but are cheaper if bought as part of a larger package, he said.

Because of its location close by the city’s Metro, District and federal courts, GolfTec sees a lot of lawyers coming through its hitting bays.

If the hole-out trend among the GolfTec crew continues, the store may soon be sporting a new sign out front: “Albuquerque’s Hole-in-one Headquarters.”

You can read more of the great articles now or in the future here on New Mexico Golf News.