(ALBUQUERQUE, N.M.) June 22, 2012 — The Albuquerque Golf Advisory Board has approved a compromise schedule of city greens fee increases that will likely go into effect in early July. 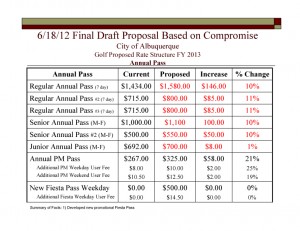 The advisory board negotiated some reductions from an earlier City Hall proposal to raise rates up to 27 percent. The reductions were sought to eliminate an annual $500,000 operating deficit and make the city's four golf properties self-supporting.

The rate increase will go into effect after a public hearing and signoff by the city's chief administrative officer. That could take about two weeks.

Below is a detailed look at how all classes of rates and passes will increase, by time of day and day of week. 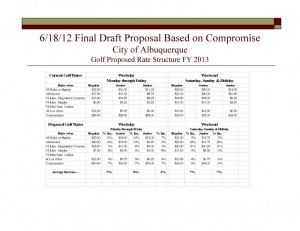