(PORT ST. LUCIE, Fla.) Feb. 2, 2012 — New Mexico golf icon and Irish Senior Open winner Joe McDermott is recovering from a detached retina and awaits word on whether he will regain sight in his left eye. 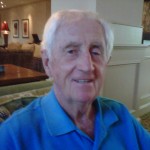 McDermott, 71, woke up without sight in the eye the day after Thanksgiving 2011. He spent five days in the hospital. Surgery to reattach the retina occurred Dec. 1.

“Now, I can see a black spot in the center and fuzzy light around the edges,” he said. “I can wave my hand in front of my eye and can see movement. I can't tell it's a hand, but the doctor is optimistic.” His right eye is still good.

Cataract surgery, which possibly may further improve his vision in the left eye, is scheduled in several weeks. McDermott had lived part-time in New Mexico and Florida, but moved permanently last fall to his home near the PGA Village Golf Club in Port St. Lucie.

Thanks to a magical short game, McDermott won the New Mexico Open and several New Mexico Senior Opens. He is a multiple recipient of the section's Senior Player of the Year award. He also received the section's Lifetime Achievement Award.

McDermott was born in Kilrush, Ireland, a town halfway between Lahinch and Ballybunion. As a boy, he emigrated to Chicago, where he won the City of Chicago and Cook County Amateur. In the early 1960s, he was recruited by University of New Mexico Golf Coach Dick McGuire to play golf at UNM. He became a PGA professional after college.

In 1998, McDermott became the first native-born Irishman to win the Irish Senior Open. A hole-in-one on the 13th hole of the final round vaulted him to victory over a several Ryder Cup veterans. The win gained him status on the European Senior Tour, where he competed for several years before returning to New Mexico to work at Albuquerque Country Club.

Until Padraig Harrington's emergence, McDemott's 1998 win was the only one by a native-born Irishman in any of Ireland's major professional events.

Most recently, McDermott was a teacher at Ladera Golf Course under his former Lobo teammate, Sam Zimmerly.

“Since the eye, I've putted and chipped a little, and some fellows here at the PGA Village saw me hitting shots with one eye, and they gathered around and by the end of it there were maybe 30 of them asking me about this and that,” McDermott said. “It will be awhile still before I hit a longer club.”

McDermott's teammate from the University of New Mexico Lobo Golf Team, Guy Wimberly, also has been recovering from an eye ailment. Last month, Wimberly was inducted into the Albuquerque/New Mexico Sports Hall of Fame.

Avid Santa Fe amateur golfer David Miller, a good friend, died Wednesday of a heart attack. Miller, known as “The Mills” and “The Black Squirrel,” was a regular at the Marty Sanchez Links de Santa Fe.  He was past member of the Golf Channel's New Mexico Amateur Tour. Miller, owner of his own real estate appraisal company, had just finished working out at a Santa Fe gym when he became short of breath and collapsed.

Membership registration for the Sun Country Junior Golf Tour is open for junior golfers of all skill levels in New Mexico and El Paso County, Texas. This year’s Junior Tour will host about 50 tournaments across New Mexico and El Paso. Memberships cost  $40. Most individual tournament entries will be $25. Visit the Sun Country PGA Junior Tour site.

Albuquerque's Katie Kempter was spotted at PGA Village Golf Club in Port St. Lucie, Fla., working on her game with coach Bill Harvey of Arroyo del Oso Golf Course, who was in town to compete in the PGA's Senior Stroke Play Championship. Kempter plays on the Futures Tour.