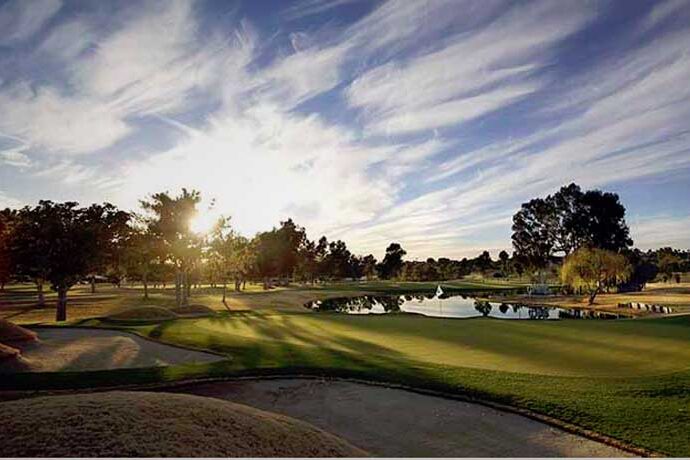 I’ve been a fan of Phoenix-Scottsdale since about 1990 as a quick and easy getaway for Albuquerque golfers, but I’ve started coming around to Tucson golf as a more affordable – and drivable – cold-weather option.

There’s no denying Metro Phoenix and the Valley of the Sun – from the Wigwam in West Valley to Mesa, Tempe and Fountain Hills to the east – have some of the best golf to offer snowbirds, including New Mexicans fleeing our own cold and wind.

I’ve written about Tucson golf before, but with the price of golf in Scottsdale in late winter and spring climbing ever higher, it’s time to add Tucson to the go-to list.

But, here’s a short list of Tucson’s strong points, in my mind:

Driving to Tucson via I-25 and I-10 from Albuquerque gets you there in under seven hours and it bypasses the regions of New Mexico and Arizona with the greatest chances of snow, which are around Grants and Flagstaff.

If you’re confident the skies will be clear, and you’re looking for a scenic drive, you can head to Tucson via U.S. 60  by going west from I-25 at Socorro or by cutting southwest from I-40 on N.M. 117 east of Grants, which takes you around the Malpais lava flows through Quemado to Springerville, then southwest through the Arizona mining country to Globe, then due south on Arizona 77 through Oro Valley and finally into Metro Tucson.

My preferred route to Tucson, however, is the high-speed one via I-25 to Hatch, then cutting southwest from there, with a brief pit stop at the one big Pic-Quik gas station and convenience store, followed by a high-speed run to I-10 at Deming via N.M. Hwy. 26, which is almost as fast as the interstate.

By air, flying to Tucson from Albuquerque isn’t as much of a bargain as flying to Phoenix Sky Harbor. Southwest has more non-stops and better fares to Phoenix. But the Phoenix airport is well under two hours from Tucson.

Once you’re in Tucson – the golf

Golf in Tucson is fairly scattered, with most resort courses tucked into the foothills of the Catalina Mountains that run north and south to the east of I-10, which is a north-south highway in this part of Arizona. They’re clustered around Marana and Oro Valley, which are north of Tucson proper.

Topping the list are Dove Mountain, Tucson National, Arizona National, La Paloma, El Conquistador, The Views, The Gallery and Ventana Canyon. In town there are two high-quality munis run by Troon Golf: Randolph Park North and Randolph Del Ulrich, that are side by side. On the southwest fringe of the city is Sewailo, a Notah Begay design on the property of the Casino del Sol resort.

Where to go in Tucson

My favorite attraction in the Pima Air and Space Museum, which is adjacent but separate from the Davis-Mothan Air Force Base aircraft boneyard. The boneyard, which features acres and acres of mothballed military combat and transport aircraft. Bus tours of the boneyard were significantly curtailed during the Covid pandemic, so you should call ahead to inquire about availability.

The museum, which is privately run, has an extensive and well-curated collection of civilian and military aircraft from around the world, including planes from around the world that flew in World War II, Korea, Vietnam and Desert Storm. Stars are an SR-71 Blackbird, B-17G, MiGs from the earliest MiG 15 to the MiG-29.

In Downtown Tucson, there’s a 3.9-mile-long streetcar line that one can hop on or off for a day or shopping.

New Mexicans used to red and green chili should expect a style of food closer to Mexican than New Mexican. The original El Charro Cafe on Court Street in Downtown Tucson is the place to go for authentic Mexican. Established in 1922, El Charro lays claim to the nation’s oldest Mexican restaurant in continuous operation by the same family. It features traditional Northern Mexico-Sonoran style and innovative Tucson-style Mexican food.

The Omni Tucson National Resort is convenient both to Downtown and far enough north to allow easy access to the courses in Marana and Oro Valley. The resort has two championship courses, the Catalina and the Soroan Course. In partnership with the PGA Tour the Omni offers golf packages at Omni resorts across the country.The resort recently announced a major modernization and renovation plan.

Dan Vukelich, a membr of the Golf Travel Writers of America,  is editor of New Mexico Golf News. He is also the online editor of Alabama Golf News and writes for SI.com