Al Czervik is Alive and Well

If you think Rodney Dangerfield, AKA Al Czervik in “Caddyshack,” is dead, you haven’t met Marc Melzer, who has Czervik, the movie’s idiosyncratic horse’s ass real-estate developer, down pat.

After 15 years of impersonating Dangerfield – down to his bug-eyes, tics and shoulder shrugs – Melzer can work a cocktail party the same way Al Czervik worked the dining room at Bushwood Country Club. 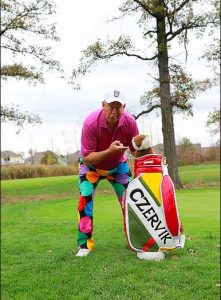 I ran into Meltzer/Cvervik at a reception held by the Salamander Resorts, which was promoting their golf properties, Hammock Beach Resort, Reunion Resort and the Innisbrook Resort, among others, at the PGA Merchandise Show in Orlando.

I spotted him from across the room thanks to his garish yellow, green and orange cardigan and his string of Czervik one liners.

“Could you scare up another round for our table over here? And tell the cook this is low-grade dog food. I’ve had better food at the ballgame, you know? This steak still has marks from where the jockey was hitting it.”

As he came our way, I heard familiar lines being fired off in machine-gun fashion. “Last time I saw a mouth like that, it had a hook in it.”

“Oh, this your wife, huh? A lovely lady. Hey baby, you must’ve been something before electricity.”

“He called me a baboon, he thinks I’m his wife.”

Melzer says once he recognized his physical resemblance to Dangerfield’s Al Czervik character in the 1980 movie he started working on his routine, using his family as guinea pigs.

After his wife gave him the garish sweater, he knew he was destined to play Al Czervik.

“I started 15 years ago telling jokes to my daughters and wife; they told me to take it to the stage and get it out of the house,” he said. “I get no respect at all.”

During an interview it was hard for Melzer not to stay in character, even as we parted.

“Oh, this is the worst-looking hat I ever saw. What, when you buy a hat like this I bet you get a free bowl of soup, huh?” he said. “Oh, it looks good on you though.”

Now, I can’t remember if I was even wearing a hat.