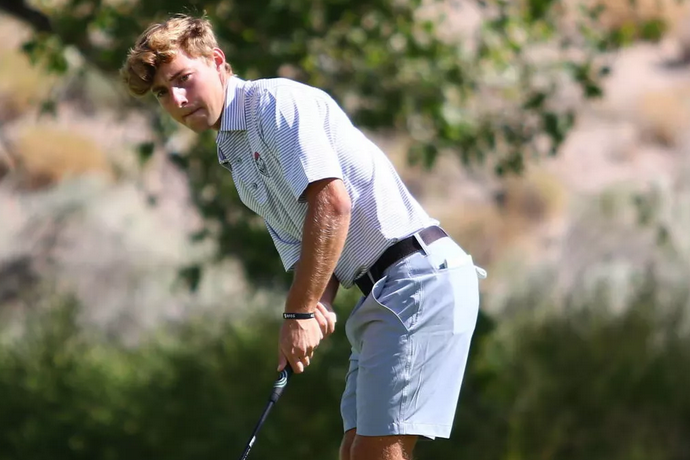 Sophomore Albert Boneta of The University of New Mexico men’s golf team earned his first collegiate victory Saturday at the Thunderbird Collegiate after a career-best final score of 12-under.

Albert Boneta, of Barcelona, Spain, led the Lobos with a final score of 201, finishing in a three-way tie with Ludvig Aberg of Texas Tech and Blake Tomlinson of Utah at Papago Golf Course in Phoenix.

The sophomore led the Lobos to eighth place in a competitive field that featured eight teams ranked in the top 35 in the nation. UNM finished with a final score of 17-under at 835 which was just six strokes out of fifth place.

Boneta entered Saturday with just a hole left to play in round two and tied for ninth place overall. He finished the final hole with a par. Starting Round 3 on No. 10, he came out of the back nine even. It was on the front nine that he made up ground with five birdies to finish at 5-under in the final round.

Junior Sam Choi was the second-highest Lobo on the leaderboard and finished in the top 20 of the field. Choi tied for 16th overall with a final score of 207 (6-under) after posting a 69 in round one, a 67 in round two and a 71 in round three.

Freshmen Bastien Amat and Matthew Watkins tied with a score of 215 (2-over). Both shot a 69 in the third round to make up some ground.

Watkins also registered UNM’s only eagle on the tournament, No. 1 in the third round. It marks the first of his career. The Thunderbird was his collegiate debut.

Junior Brandon Shong rounded out the Lobo scoring effort with a 73 in the final round after shooting a 72 and 75 on Days 1 and 2.

New Mexico has just one regular-season event left before taking on the 2021 Mountain West Tournament. Before that, they’ll head to the PING Cougar Classic on April 23-24 hosted by BYU at the Riverside Country Club in Provo, Utah.