Brothers Rob and Gene Scott decided not to renew their lease at 8212 Menaul Blvd. NE in the Hoffmantown Shopping Center. They plan to retire: Rob to trout fishing, Gene to puttering around his shop at home and traveling.

Rob, 70, was a student in Iowa and working at a golf shop there when the owner announced he planned to open an Albuquerque store and would Rob like to work there. Soon, he bought the place and in 1981 he brought in his brother, Gene, who had just finished a summer in Alaska working on an oil pipeline.

A division of labor at the store soon developed: Rob kept the books and did the ordering and Gene gravitated to club repair. The store developed a reputation for service and has repeatedly been honored as one of the best clubfitters in the United States. 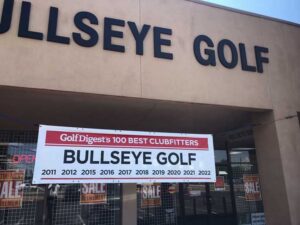 Bullseye Golf Center was recognized for its clubfitting expertise.

“Treating people like you want to be treated is part of our success,” Gene said. “A lot of customers became friends.”

Rob concurred: “It’s not hard to be nice to people.”

Albuquerque had as many as eight golf stores in the late 1980, Rob said. Until Thursday, there are three: Golfmart, Dick’s Sporting Goods and Bullseye Golf Center.

Rob recalls that golf equipment in the 1970s as wasn’t as sophisticated as it is now. There were wooden heads and steel shafts and no graphite. “Clubfitting wasn’t nearly as technical as it is now,” he said.

Gene, 67, says that he learned while repairing clubs never to ask a customer how a club came to be broken. “I never ask about it because I don’t want to embarrass them,” he said.

He fondly remembers PGA Tour pro Charlie Sifford, a pioneering Black player, came to Albuquerque to play in the Sunwest Bank Charley Pride Classic in the early 1980s. He stopped in at Bullseye to have his clubs’ loft and lie adjusted, “and the next day he got a hole in one,” Gene said.

The two brothers said they’ve not had a vacation in eight years, working six days a week. Rob has a condo north of the New Mexico-Colorado border between Chama and Antonito and plans to fish the Conejos River. Gene is looking forward to a trip to the Pacific Northwest.

Dan Vukelich is the editor of New Mexico Golf News