ABQ Golfer, 11, Heads to The Masters

Callia Ward, New Mexico’s top golfer among girls 10 to 11, will be on TV at The Masters

She Represents the Next Wave of Talented Junior Girl Players

Eleven-year-old Callia Ward of Albuquerque will be at Augusta National Golf Club on Masters Sunday with her golf bag slung over her shoulder – one of 10 regional finalists vying to become the national Drive Chip & Putt champion among girls 10 to 11 years old.

Callia beat out nine other girls at the regional at Southern Hills Country Club in Tulsa last fall by sticking five of her six chips from 30 yards to a within a foot of a short-sided pin, her father Vince Ward said.

“She has a phenomenal crazy good short game,” he said.

At each level of competition, players post combined scores in driving distance and accuracy, closest chips and most holed putts.

The Golf Channel will broadcast the Drive Chip & Putt finals starting at 7:45 a.m. on April 1.

How She got to Augusta 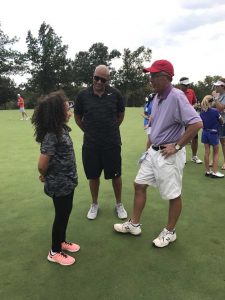 Drive, Chip & Putt is a free nationwide junior golf development competition aimed at growing the game among young players. The competition was jointly launched in 2013 by the Masters Tournament, United States Golf Association and The PGA of America, according to the Drive, Chip & Putt website.

Tens of thousands of juniors compete each year, starting at one of 288 local qualifiers in the summer, then progressing in fields of 10 per age group through 38 sub-regionals until one winner emerges in the boys’ and girls’ age groups from each of the 10 regionals and heads to Augusta on Masters Sunday.

Registration is now open for local qualifying events this summer at the Drive Chip & Putt national website. Entry is free.

Callia Ward, or “Cal,” as her family and friends call her, is a student at Manzano Day School. She took up the game at about age five or six after following her dad around the  course. Since then, she’s won the junior championship at Albuquerque Country Club, where her dad, a nine handicap, is a member.

She’s scored a 35 for nine holes from the junior tees and 41 from the red tees. As a junior, she rarely plays 18 holes but has posted a 77. Locally, she’s played UNM Championship, Sandia, Isleta, ACC and Santa Ana, as well as some courses in Arizona where she competes seasonally in a junior league.

“I like to compare my scores to the boys,” she said. As well she should. Her five-foot frame delivers drives averaging 190 to 200 yards, her dad said.

“I want to play for the LPGA Tour when I grow up,” Callia Ward said.

Not surprisingly, 85 percent of her practice time is spent on her short game. That works out to chipping and putting six days a week several hours a day. 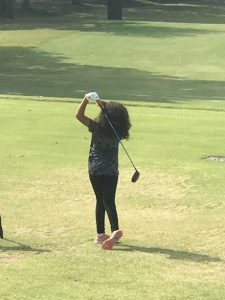 “I was diagnosed with ADHD a couple of years ago,” Callia Ward said. “Golf has really helped me with my focus. And it’s increased my self-confidence.”

Callia Ward doesn’t watch much golf on TV, but she does have her favorites. Her favorite female golfer is Michelle Wie. “She’s really pretty and a talented golfer,” she said. She thinks the “coolest” player on tour today is Rickie Fowler “because I like the way he dresses. And he is really calm and seems to be having fun.”

Callie said she has no difficulty in shutting out the pressure of competition. At Southern Hills her biggest crisis was deciding whether or not to use a new putter.

Among her other likes: mac and cheese, Wonder Woman, Adelle, ping-pong and the Minecraft app.

Callia Ward wasn’t the only New Mexican to shine this year.

The final standings of the Tulsa regional last Sept. 17 bode well for junior girls’ golf in New Mexico. Two others in the  group of 10 finalists in Cal’s division are from the Albuquerque Metro area. Rylee Salome of Los Lunas finished seventh and Lillian McDermott of Albuquerque finished ninth.

[This story was updated to correct the date of the finals in Augusta.]