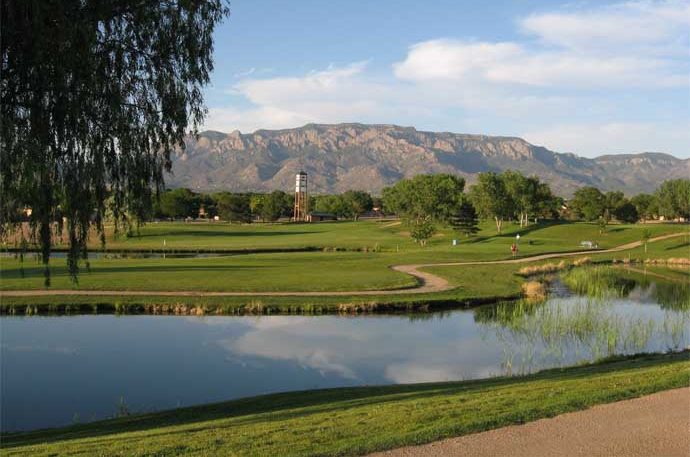 Fears that one or more of the Albuquerque city golf courses might be closed appear to have fallen by the wayside, at least for now, thanks to the City Council's approval of a tax increase to cover most of a $40 million City Hall budget shortfall.

But the fact that closures were suggested at all signals that a long-term strategy is needed to make the the four Albuquerque muni courses economically viable.

A golf consultant's study completed last May laid out cost-saving scenarios in which one or both the Puerto Del Sol and Los Altos golf courses could be be closed and the land re-purposed.

The study posited that if the 27-hole Los Altos facility were closed, the land could be converted to parkland or into unspecified recreation fields.

The study went so far as to recommend the 9-hole Puerto del Sol course, lying on land leased from the city airport authority, be converted into a soccer field, a lighted driving range only, or a Top Golf-style golf-themed entertainment venue.

The Golf Management Division of the Parks and Recreation Department, which oversees the four Albuquerque city golf city courses, is set up as an enterprise fund, meaning that the courses are supposed to be self-supporting through fees. But that hasn't been the case for quite some time and annual deficits grew.

The study found that in 2016, the Albuquerque city golf courses lost $1.6 million, even through golf demand outstrips supply in the Albuquerque market. Using PGA of America data, the consultant, J.J. Keegan of Castle Rock, Col., posited that the city courses should be making $520,000 a year.

The consultant was strongly critical of the concessionaire system that City Hall has used for decades to operate the golf courses.

Under the system, city crews who are paid higher than the industry average, maintain the Albuquerque city golf courses using city-owned equipment. The city is solely responsible for investing in capital improvements such as the irrigation systems and clubhouses. The city keeps all greens fees. Concessionaires retain everything else, minus a percentage of cart fee, food and beverage and equipment sales revenues.

The study explored the feasibility of scrapping the current concessionaire agreements.

In fact, a fair reading of the report indicates the consultant favors either doing away with them or significantly altering their contract terms. “Continuing the current business model ad infinitum makes little sense,” the report says.

Alternatives to the current concessionaire system put forward in the study include:

Based on the lengthy discussion in the 165-page report of the single large operator scenario, a fair reading of the report suggests the consultant favors that as a long-term option for the four Albuquerque city golf courses.

Under that option, it recommended, “Upon the expiration of the current concessionaire contracts, issue a Request for Proposal for the lease of the individual course or, if and when the contracts co‐terminate, lease all four golf courses in [a contract] which the City would receive a percentage of gross revenue,” the consultant wrote.

That move, the report suggests, reduces the city's risk but unless the leases are carefully written, could allow the management company to maximize its profit while allowing the courses to be run into the ground.

During the last administration, supporters of the three local concessionaires testified at local meetings that the personal connection of the people running the four pro shops is one of the attractions of the four Albuquerque city golf courses. After an initial move to oust the three concessionaires, the move was abandoned. Although the Arroyo del Oso Golf Course agreement is up at the end of 2018, all three concessionaire agreements won't be up until 2021.

Some disagreement exists as to the accuracy of the financial assumptions underlying the J.J. Keegan study.

Los Altos, which lost its well in 2015, relies on non-potable treated effluent that it buys from the Albuquerque Bernalillo County Water Utility Authority and piped uphill from the ABCWUA's South Valley water treatment facility. Once a new $1.5 million Los Altos water well, already approved and budgeted for, is drilled, as much as $400,000 to $500,000 a year in Los Altos' water costs comes comes off the books. Work on the well was scheduled to start in January but hasn't yet started.

The consultant's study, which was completed in May 2017, also doesn't reflect the dramatic turnaround in patronage at Ladera Golf Course. Long treated as the stepchild of the four Albuquerque city golf courses, Ladera limped along for years, thanks to poor turf and playing conditions, until the city spent several million dollars to upgrade its leaky 1980 irrigation system and built new cart paths just within the last two years. All work was completed last year.

Was Closure of Any Golf Course a Really Short-term Option?

In the days before the March 5 City Council vote to raise the gross receipts tax, Philip Clelland, marketing manager for the Albuquerque Parks and Recreation Department, told New Mexico Golf News, an array of cost-saving options was being discussed at City Hall “but nothing is set in stone and nothing is being pursued.”

Two of the three golf course concessionaires said before the City Council tax vote that they were either optimistic or certain that closing one or more courses was off the table for the immediate future.

“The only news we were aware of is they did a study from an outside group and in the study were several suggestions and one of them was that to close a golf course,” said Tony Hidalgo, whose company operates the city's busiest course, the 27-hole Arroyo Del Oso Golf Course in the Northeast Heights. Hidalgo also runs the Puerto del Sol golf course in the Southeast Heights. “As far as our knowledge, we haven’t heard any more.”

Bill Harvey, who recently succeeded long-time manager Sam Zimmerly at Ladera on the city's West Side, said he is certain that closing a municipal golf course, either his or one of the others, will not happen.

“Nobody has spoken to me, and last word we got was that there is no way they were closing a golf course,” Harvey said. “There were suggestions last fall about it, but much larger headaches are involved than just saying it.”

“There are no plans whatsoever,” he said.

Chris Moya, who operates Los Altos Golf Course in the mid-Northeast Heights, referred questions to the Golf Management Division of the Parks and Recreation Department.

The city already has plans to raise greens fees at the four Albuquerque city golf courses by $1 across the board effective April 15. The weekday walking fee for 18 holes would increase from from $25 to $26. A public hearing on the proposed increase is set for 3 p.m. April 2 the special events room at at Ladera Golf Course, 3401 Ladera Dr. NW.

But raising greens fees is not the answer, the study found. In addition to entrenched opposition by seniors, who enjoy golf discounts at Albuquerque city golf courses, significantly raising the rates at the city courses is not feasible because of the gap in customer experience between the munis and the casino courses would still be too great.

Translation: even if the public tolerated the cost of riding a golf cart during a round at a city course rising to $60 or $70 or $80, players would opt for the casino courses because of the quality of the courses and the overall golf experience.

At the same time, to bring conditions at the municipal courses up to par with the casino courses would require a capital investment of $16.5 million, well beyond what is politically acceptable at a time when the public wants more police protection.

The consultant's closure scenarios focused on Los Altos and Puero del Sol. The study made no mention of potentially closing Arroyo del Oso, which is the city's busiest golf complex and at one time was the busiest in the Southwest. Nor did it mention closing Ladera.

In the long term, closure of Ladera is unlikely for two reasons.

The city in the last decade has pumped millions of dollars to improve conditions at Ladera, including more than $2 million for a new irrigation system and even more for new cart paths. Plus, the course, built on land formerly owned by the Albuquerque Metropolitan Flood Control Authority that was later deeded to the city, is a flood drainage area on which few others uses are feasible.

Dan Vukelich, editor of New Mexico Golf News, is a member of the Golf Writers Association of America and the Golf Travel Writers of America. If you have golf news or if a hole-in-one was scored at your course, reach him at dan@newmexicogolfnews.com