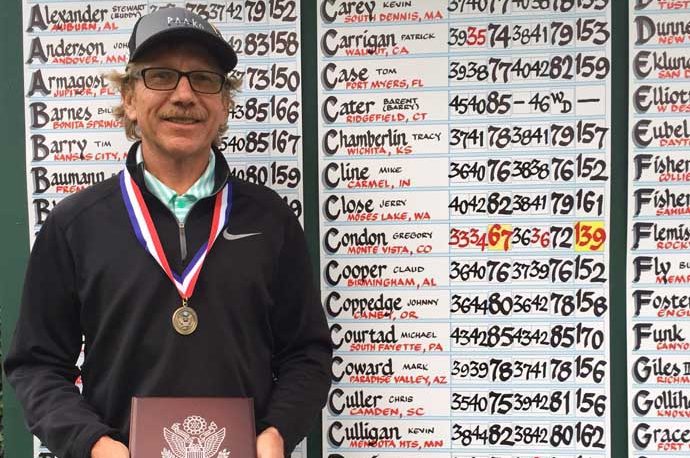 Updated: Greg COndon was eliminated Tuesday during the round of 32 by Buzz Fly of Memphis, Tenn., 2-and-1. Condon lost the first hole and brought the match to all square on the back nine but couldn't close the gap when  fly won two holes late in the round.

Greg Condon, who was co-low-medalist in stroke play portion of the US Senior Amateur, won his first match 4-and-3 Monday over No. 64-seeded Kirk Wright of Oklahoma City.

Condon, of Monte Vista, Colo., qualified out of Paa-Ko Ridge Golf Club outside Albuquerque. The other Paa-Ko qualifier, Jack Slayton, also made it into the round of 64 as the No. 45 seed.

Slayton and his No. 20 seed opponent, Jeff Burda of Modesto, Calif., fought a nailbiter that went past 18 holes.

Slayton, who plays out of the Canyon Club at Four Hills,  was 2-up through 11 holes but lost Nos. 12 and 14 to bring the match back to even. Burda won No. 15 to go 1-up, an edge he held through No. 17. Slayton birdied No. 18 to send the match back to all square going into the 19th hole, where Burda brought home the win.

In the stroke play portion, Condon shot a 5-under 67 to take co-low medalist honors.

Condon has been on a hot streak in New Mexico recently. He ran away with the Paa-Ko Ridge qualifier in late July, the only player that day to post an under-par score that day. And he narrowly missed qualifying for the U.S. Amateur in July. He finished T3 in the Sun Country Amateur Golf Association's New Mexico-West Texas Championship in June.