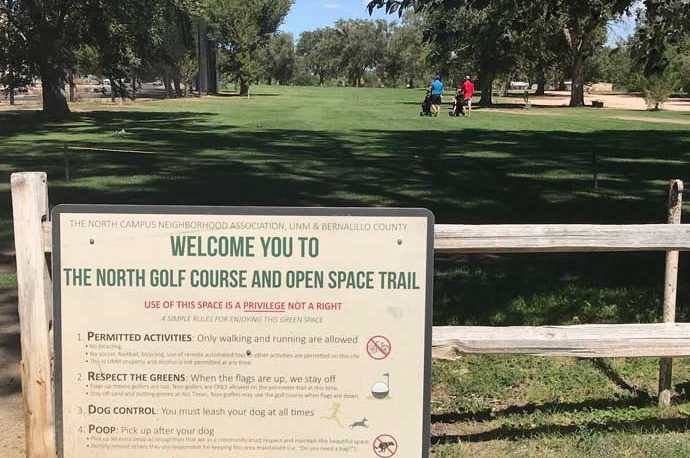 (This story was updated on Oct. 1 with UNM comment)

We love the UNM North Golf Course so much, we’re killing it.

That’s the message Sara Koplik of the North Campus Neighborhood Association delivered at a public meeting at the UNM Law School Saturday morning.

In 2012, the neighborhood association turned back an attempt by UNM to develop the 9-hole golf course into a $60 million retirement complex. The proposal would have deprived the area of one of the largest patches of green space in the city.

A compromise was reached. UNM and Bernalillo County struck a deal to keep the course’s dirt perimeter trail open to walkers, runners and dog walkers for 15 years.

Now, seven years in, there are fears that unleashed and aggressive dogs that damage the course and threaten injury to people and other dogs may lead the university to scrap the green-space deal and forge ahead with development.

UNM could opt out of the deal with 90 days notice, according to neighborhood association board members.

Although the rules of use for the green space call for dogs to be leashed and non-golfers and their pets to stay off the golf course’s turfed areas during golfing hours, the rules are widely ignored. Dogs have damaged greens, dug in bunkers and tee boxes, and menaced and injured other dogs and people.

As many as 100 people with leashed or unleashed dogs can be seen on the course at one time, Koplik told the meeting of about 30 people who gathered to seek a solution to the dog problem.

“We have had people bitten and we have had one dog that was killed,” she said. “The hawks are gone. The bunnies are gone.”

Lucy Casteñada, the golf course’s superintendent who works for the course’s maintenance contractor, Mountain West Golfscapes, said her crew spends between three and a half to five hours a day repairing damage that unleashed dogs cause to greens, bunkers and tee boxes.

“Some people don’t feel safe with dogs running around loose,” she said. “We have to figure out a way that everyone, walkers, runners, children, feel safe.”

Not everyone at the meeting believes there’s a problem. An Army veteran who walks his dog for therapy told the meeting he believes damage to the golf course is being caused by “unskilled golfers.”

The meeting’s organizers warned that if the neighborhood association doesn’t step up to address the problem, UNM could use it as an excuse to bulldoze what neighbors call a “magical place.”

UNM officials weren’t invited to the meeting, Koplik acknowledged in answer to a question. She said the neighborhood association’s priority is for stakeholders to develop consensus on a solution before approaching the university.

“We’re dealing with an entity that is extremely obtuse,” he said. “There has to be a unified approach.”

Koplik, who led the movement to block UNM’s development proposal in 2012, said UNM isn’t ticketing people with unleashed dogs. “They’d rather have us fail,” she said. “We can’t fail.”

On Oct. 1., New Mexico Golf News spoke to Tom Neal, UNM's director of real estate. Neal said, “There is no intent nor appetite for ceasing operations of the UNM North Golf Course.” He called the neighborhood association's fears “much ado about nothing.”

While the 2012 initiative may have given rise to lingering concerns, “There are no conversations ongoing at present” about altering the university's deal with the county, Neal said.

Albuquerque City Councilor Isaac Benton, who attended the meeting, said, “This is prime real estate. I can’t speak for UNM, but they’d rather…” before trailing off to address a questioner.

Later in the meeting, Davis said the golf course land is easily worth “several hundred million dollars.” He called it “some of the most valuable real estate in New Mexico.”

Davis and others active in the association made clear that they believe UNM’s long-term plan is to wait out its neighbors, tear up the golf course and build on it.

Some at the meeting believe some dog owners don’t realize that dogs on the turfed areas interfere with play; nor do they realize the danger they face of being hit with golf balls while they and their pets are on the golf course.

“I’ve approached people to tell them to stay away from the greens,” Casteñada said, “and they look around [and say], ‘It’s all green.’”

In one case, she told a man whose dog was digging in a bunker to stay off the course. As she was left, he saw him go right back. “He flipped me off,” she said.

Ideas floated at the meeting included more signage on the leash requirement; enlisting neighborhood volunteers to hand out cards listing the rules of use for the green space; reinforcing a current requirement that dogs and their owners may go on the course only after the flagsticks are removed st dusk; and establishing an annual dog-walking permit.

An idea that appeared to generate the most support was converting UNM-owned land west of the course, known in the neighborhood as the “barren fairways,” into a dedicated dog park with landscaping, shade and amenities to draw people and their pets off the golf course proper.

The area, which lies east of a north-south Albuquerque Metropolitan Flood Control Authority ditch bordering the golf course, is currently wasteland. It has been used by UNM as a dumping ground for tree limbs and dead sod.

Who would pay for its construction and maintenance was not clear.

One neighborhood resident suggested a solution developed in Scottsdale, Ariz. There, city authorities developed three dog parks where dogs can run free. One of them, the Chapparal Dog Park, features three fenced areas  – one section for timid togs, another for active dogs and a third to be rotated into use during maintenance of one of the other two.

If that becomes the ultimate solution, Davis said getting approval for construction could take years. In the meantime, “If we allow chaos to reign, UNM will try to drive a wedge between factions,” he said.