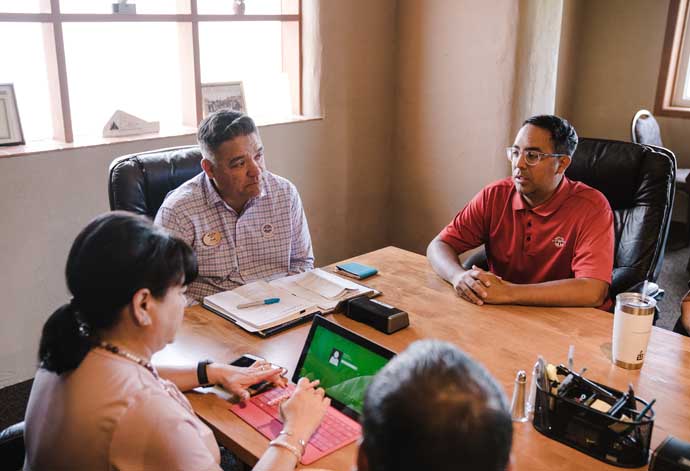 Derek Gutierrez, general manager of Santa Ana Golf Corp., has been elected to the national board of directors of the Professional Golfers Association of America, which sets policies affecting 28,000 golf professionals across the United States.

Gutierrez, 50, is the director of golf at Twin Warriors and Santa Ana golf clubs – 18-hole and 27-hole daily-fee facilities owned by the Pueblo of Santa Ana. He started in the golf business in 1990 working in the cart barn at the City of Albuquerque’s nine-hole Puerto Del Sol Golf Course.

Suzy Whaley, president of the PGA of America, welcomed Gutierrez to the 26-member national governing body, saying, “His experience, knowledge and passion for his fellow PGA professionals and the PGA brand will be a great addition to our board.”

Gutierrez spent two years on the PGA’s National Committee for Inclusion and Diversity. The committee worked closely with PGA staff liaison and Sandy Cross, formerly the director of Diversity and Inclusion and now the PGA’s Chief People Officer to develop PGA LEAD, a program designed to identify, mentor and progress future leaders from diverse backgrounds into leadership roles in their sections, the association and their communities.

As a board member, Gutierrez will help provide planning and guidance for championships, member services, growth of the game programming and general business initiatives of the association.  And, as a Director he will also be part of the governance team around  the Ryder Cup, the PGA Championship, the Senior, Women’s and Junior PGA Championships and the PGA Professional National Championship for club pros.

Gutierrez, who is Hispanic, will seek to build on ongoing efforts to increase recruitment of women and minorities into the ranks of PGA golf professionals.

Bringing Diversity to the PGA

“We’re starting to see some of the graduates of that program assume positions of leadership within their PGA sections, experience that will lead to their taking national board positions, and I’m proud to have played a role in that,” Gutierrez said.

Gutierrez’s first year on the PGA board will be spent “shadowing” the person he is succeeding, Tony Martinez a Dallas golf professional. Gutierrez will attend national board meetings, participate in conference calls and attend meetings of the Sun Country and Northern and Southern Texas sections of the PGA – the region he’ll represent.

Dana Lehner, executive director of the Sun County Section PGA, said he looks forward to watching Gutierrez “help steer the ship at the national level for the PGA after having done an amazing job here at the section level for so many years.”
“He was a steady hand for our section while also managing one of the premier facilities in the region,” Lehner said.

Other Sun Country Section PGA professionals who have held the seat Gutierrez was elected to include Grant Dalpes of Alamogordo, Guy Wimberly of Elephant Butte and Bill Eschenbrenner of El Paso.

His Start at Santa Ana

Gutierrez was working as an assistant at Los Altos Golf Course in 1996 when he was recruited by Santa Ana Golf Club’s then-director of golf, Roger Martinez. A condition Martinez insisted on was that Gutierrez commit to progressing through the PGA’s apprenticeship program to earn his Class A Professional membership. That membership is what head golf professionals are generally required to have. Gutierrez earned his Class A membership in 2004.

“I owe Roger Martinez a lot and could list a million things he taught me about how to manage operations, public relations, manage budgets and personnel,” he said.  Under Martinez’s leadership, Santa Ana Golf Corp. is credited with training more head golf professionals than any other golf property in the Sun Country Section PGA. When Martinez retired in 2013, Gutierrez succeeded him as GM.

Gutierrez was raised in Albuquerque’s North Valley. He graduated from the Menaul School and attended the University of New Mexico. He resides in the North Valley with his wife, Carolyn.  They have two children and three grandchildren.