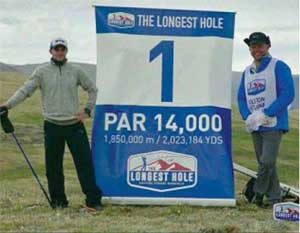 A player and his caddie slogged across 1,206 miles and took 20,093 strokes to complete the world’s longest golf hole across Mongolia.

Playing from Western Mongolia to the country’s only golf course in Ulaanbaattur in eastern Mongolia, Irishman Adam Rolston and his South African caddie, Ron Rutland, estimated they’d need 14,000 strokes but woefully underestimated the task and figure they came in at 6,093 over par.

The trek was a misery of rain, sleet, snow, injuries and theft across mountains and deserts. They had forecast they could make 15 miles a day but ended up managing only about five a day.

“The first week was miserable, unbelievably miserable, it was the hardest week of my life,” Rolston told CNN.

“The terrain, the bog, it was raining so hard and the route was so boggy that the wheels were coming off the cart and I was knee-deep in mud and sleet. Putting your tent up in rain and sleet and having to put on wet, cold shoes — I don’t think we saw sun for four days.”

The stunt, designed to claim title to the world’s longest golf hole, was to raise money for charity.