Former Lobo women’s golfer Caroline Keggi will be inducted into the Women’s Golf Coaches Association in December. The induction will take place on Dec. 8, 2019 at Planet Hollywood Resort in Las Vegas, Nev.

Keggi, along with Kellee Booth of Arizona State and Liz Janangelo of Duke will become the 76th, 77th and 78th members of the WGCA Players Hall of Fame, 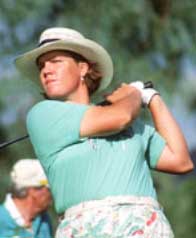 A two-time All-American Lobo, Caroline Keggi, a native of Middlebury, Conn., transferred to UNM after competing for Ohio State as a freshman where she earned All-Big Ten honors. Once in Albuquerque, Keggi exploded and remains one of the most prolific golfers in the New Mexico women’s golf program’s history.

In her junior season, she finished tied for second at the NCAA Championship before winning the individual NCAA Champion title in 1987 as a senior. Caroline Keggi remains the only National Champion in the program’s history.

She capped her collegiate career by winning the 1987 Honda Award, the most prestigious honor given to a college player. Keggi was runner-up at the Trans-National, as well as a member of the 1998 U.S. Curtis Cup Team.

Her professional career began in 1988 when she was invited to play in the Nabisco Dinah Shore, one of the five major championships on the LPGA tour. Keggi placed fourth at the event, which was the highest finish ever by an amateur in the event at the time. During her rookie year in 1989, she posted six top-20 finishes.

During her pro career, her periodic caddie was Nuey Johnson, the longtime starter at Santa Ana Golf Club and Twin Warriors Golf Club. 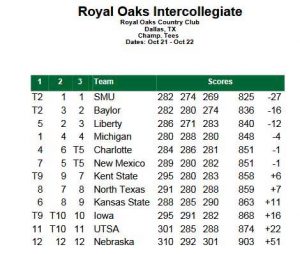 Lobo Men: The University of New Mexico men’s golf team finished tied for fifth at the Royal Oaks Intercollegiate hosted by Baylor earlier this month. The squad was led by redshirt-junior Ross Sinclair who finished 12th overall to mark a new season-best after posting 6-under in round three.

SMU took home the team title at the competition

The manner and message behind his termination – that the broadcast team had grown “stale” – isn’t sitting well with McCord, 72.

“Stale did not work for me,” McCord told Sirius XM PGA Tour hosts Drew Stoltz and former PGA Tour pro Colt Knost. “That kind of got me riled up a bit. … I didn’t like that at all.”

Favorite PGA Tour Playing Partners: Golf magazine polled the competitors at the Safeway Open last month to find out who their favorite and least-favorite playing partners are:

Leading in the favorite category were Kevin Kisner, Charles Howell III and Harold Varner III, who tied with “anyone who plays quickly. Least favorite was Bryson DeChambeau who has been criticized for his slow play. Full results of the poll of 52 players who were asked 46 questions will be published in about a week, Golf.com reported.