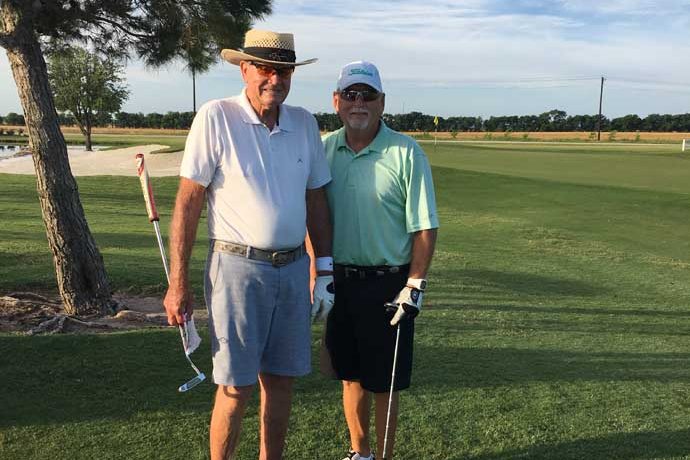 Ray Hibler (left in the photo above with friend Doyle Hicks) posted a 71 Monday at Robson Ranch’s Wildhorse Golf Club northwest of Dallas-Fort Worth.

That’s 16 strokes better than his age and 1-under on the par 72 golf course.

“Those of us who know Ray know that shooting his age is a bad day of golf,” Martinez said. “The feat of breaking his age is a regular occurrence. A 71 at 87, well, that was something special.”

In his prime, Ray Hibler was an amateur force in the Sun Country region The Florida Sun Sentinel reported in 1988 that Hibler made an 8-foot putt on the 18th hole of the Broadmoor East course at Colorado Springs, Colo., to protect a 1-up lead and win the 29th annual World Senior Golf Championship. Hibler, then 57, defeated Dave Freundlich, 56, of La Jolla, Calif., on the par-72, 6,555-yard course.

In 2009, Ray Hibler wrote to his college pal, Texas Hold’em legend Doyle Brunson urging Brunson to contact a 15-year-old girl diagnosed with terminal cancer. “My ex-roomate in college, Ray Hibler, called and asked me to write her an encouraging letter recounting my ‘terminal’ battle with cancer 55 years ago,” Brunson wrote on the website Gambling 911.

“Margaret is a poker enthusiast and I’m certainly going to call. She is trying to spend her remaining days doing something new and enjoyable.”

In Other Golf News

SCAGA’s 2019 New Mexico-West Texas Amateur Championship tees off for Round 1 at 8 a.m. on Friday at Paa-Ko Ridge Golf Club. The 64-player field for the 43rd edition of the event is packed with the state’s top golfers and includes some of the UNM Lobo Men’s Golf Team, plus familiar top finishers in past SCAGA championships.

Past winners include Tommy Armour III, Bart Bryant, Rich Beem and D.J. Brigman, Winner of the 2018 event Isaac Merry won’t be un the field this year.

Admission for spectators is free but note that Paa-Ko features some of the hilliest terrain in Sun Country. Here are the Round 1 pairings.

The winner will receive an invitation to play in the Pacific Coast Amateur Championship, which will be played at the UNM Championship Golf Course next month.