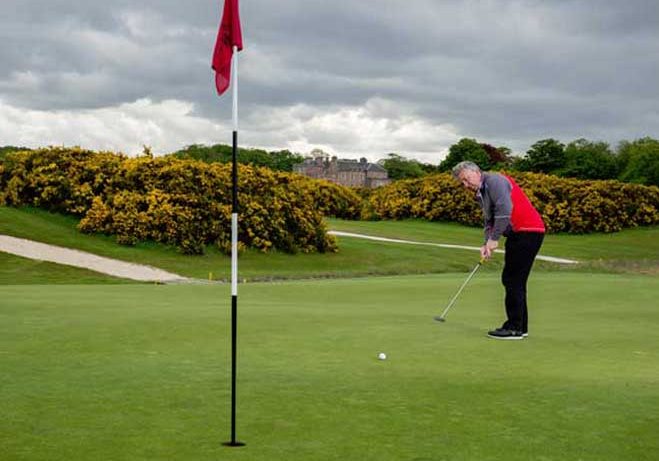 Thumbs Up on Putting Change, Mixed Reviews on Knee-high Drop

Much of the golfing world will be seeing PGA Tour pros putting with the flagstick in for the first time this weekend at the Waste Management Phoenix Open.

From the first two days of coverage of “The Greatest Show on Grass,” it’s clear some PGA Tour players at the event, notably Bryon deChambeau, have embraced putting with the flagstick in, while others, including Tiger Woods, see other rules changes such as the knee-high ball drop as just weird.

After the annual Golf Writers Association of America tournament, held on the Conservatory and Ocean courses at the Hammock Beach Resort in Palm Coast, Fla., in late January, I polled some of the GWAA members present about their thoughts on the 2019 rules changes.

The new rules were in effect during the rain-shortened tournament, which was won by veteran Wisconsin golf journalist Chuck Garbedian. By the end of Day 1, in my group the flagstick was left in for almost all putts except when a player was putting into the wind.

Gary Van Sickle, formerly of Sports Illustrated, now writing for the Morning Read website, offered the most detailed reaction to the rules changes.

Knowing that leaving the flagstick in during a recreational round saves 40 seconds per green, or 12 minutes per 18 holes, is plenty of reason to leave the pin in, he said.

“For TV golf, having the pin in on longer putts is great for the viewer because the cup often isn’t visible. Dave Pelz did tests years ago and proved it’s better to leave it in and I never argue with Pelz,” he said.

“I recommend hitting putts from three feet with the stick in and seeing how hard you have to hit a putt to have it clang out. It’s pretty hard. The sad truth is, how relevant is it? How often do you and I hit the cup from outside 8 feet anyway?”

Putting with with the Flag Stick in Once Was Legal

Van Sickle noted that leaving the pin in was legalized in 1952 and remained legal through 1968.

“Arnold Palmer famously clanged a putt off the pin at 16 in 1960 Masters final round [and it] looked like it would cost him the Masters. Then he birdied 17 and 18 with the pin out to beat Venturi,” he said.

“I tried but failed to find anyone who remembered why, after it was legal for 16 years, the USGA outlawed the flagstick again in 1969. My guess is it was [then-USGA head] Joe Dey being a hard-ass again, but I don’t know.”

“On the knee-high drop: “Why not just place it? Only improvement is that the ball when dropped from knee height is less likely to hit and roll back into a hazard or outside the legal two-club-length limit. [It] may lead to fewer re-drops, may not. I don’t see this being significant except for how it looks on TV.”

Mike Bailey of the Golf channel likes both the flagstick and knee-high-drop rules. “I really do feel like it speeds up play,” he said. Our group left it in except for shorter putts. That means you don’t have to wait for someone to tend the flagstick.As for the knee drop rule, no complaints there either. I think it’s more fair, especially if you’re having to drop in a penalty area where the ball could create a more difficult lie after the shoulder high drop.”

Wayne Mills, a Florida freelance writer who missed the GWAA event because of health issues, nonetheless weighed in on the knee-high drop rule: “If the idea behind it is to save time … let’s just place it and be done.”

Bob Carney, communications chief of the Connecticut State Golf Association, said of the flagstick in rule, ” I think among weekend golfers there will be two stages. Long putts will be with the flagstick in, short putts, out. Some of the faster players will leave them in all the time.”

“It may be that we simply play two different ways: When it’s fun golf and we’re in a hurry, the flagstick never moves. When there’s money on the line, it’s back to the same old routine,” he said.

Consensus: Leaving the Flagstick in Can Help Long Putts

Gregg Dewalt, sports editor of the Times Daily newspaper of Florence Ala., hometown to PGA Tour player Stewart Cink, said Cink advises leaving the flagstick in for putts of 30 feet or longer, when it might help putts rolling too fast when they hit the hole.

Dan Shepherd of Dan Shepherd Communications said he loves the flagstick rule but especially likes the freedom to replace a ball that has been moved by the wind after address even more.

Betsy Mitchell, who writes for The Pilot in Pinehurst, N.C., sees the only downside of the flagstick rule being “the awkward moments created by fellow competitors with different opinions with the flag going in and out.”
She approves of the rule change allowing replacement of a ball moved by wind and no penalty for accidentally moved while searching for it.

“I have had three rules situations where players were penalized for a ball that moved that was completely beyond their control,” she said. “It never seemed fair that the only way you could find your ball was to move stuff but if your ball moved it was a penalty (think pile of pine straw).”

Van Sickle challenged the wisdom of changing the time limit to search for a lost ball: “Cutting search time from five to three minutes sounds like a time-saver, but it won’t be,” he said. “This will be a factor only for those playing in an actual amateur competition.

“Young players bomb it 310 in the air and if a tourney setup has rough, from that distance it’s tough to see exactly where it went into the rough. There are no spectators, marshals or forecaddies at these events, so three minutes suddenly becomes not very long for a ball that’s not in the woods, just in significant rough.