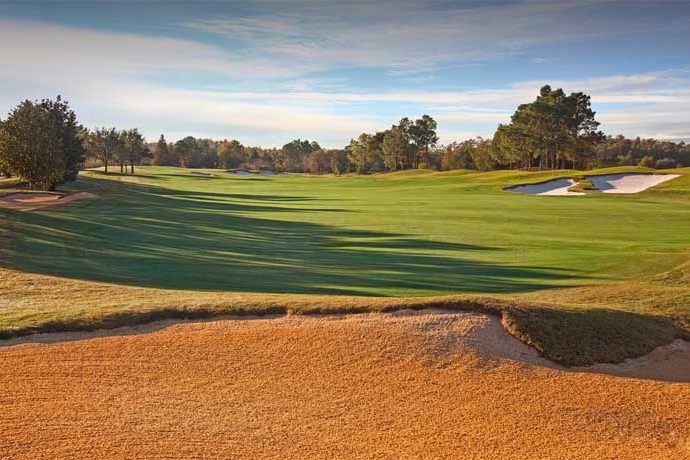 Here are Three Worthy Florida Golf Venues to Check Out

If you're headed to the 2018 PGA Merchandise Show in Orlando, here are some golf choices ranging from the nearest course to the show to an overlooked bargain to a worthy destination a day's drive away. 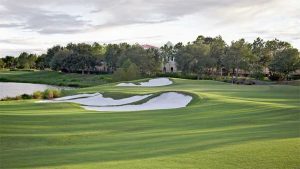 The nearest golf course is the Rosen Shingle Creek Golf Club, less than two miles from the Orange County Convention Center, the sprawling venue for the show.

Shingle Creek was redesigned a little more than a year ago by the Arnold Palmer Design Co. with a reduction in bunker sizes, a lengthening of par 4s and 5s and improved sight lines. While the size of bunkers has been reduced, their placement still influences what club is needed off the tee.

Most significantly, Shingle Creek's redone greens are huge  – ranging in size from 3,500 to 9,500 square feet.

This is what Thad Layton, head of the Palmer design team, said about them:

“Bold greens with character: A variety of green shapes and sizes with a relatively large amount of contour will distinguish this course. There is ALWAYS more than one way to get the ball close when off the green. The different slopes in and around the greens when combined with fairway mow-outs around the greens will promote creative recovery options.”

We found that to be true during a round last year during the 2017 PGA Show. Although you might face a 40-yard pitch from 10 yards off the green, 30 of it will be green that is so wildly undulating, with two and even three severe breaks, that a pitch and run isn't the appropriate play.. What Layton means is that a high shot over the breaks may be in order to get one close.

Suffice to say that if you're putting from farther than 30 feet, you'll be hard-pressed to two-putt.

Greens fees for the week of the show run between $119 and $149 and include cart with GPS, range balls and free valet parking.

A Bargain on Orlando's Outskirts 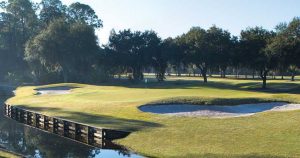 So much about Orlando is so new, so cookie-cutter, and trending to high end that it was refreshing when an Alabama golf writer I know and his long-time pro pal from Florence, Ala., found Rio Pinar Golf Club, a throwback to another era.

On the northeast edge of the Orlando Metro area, 22 miles or about 30 minutes from the PGA Show, Rio Pinar has the feel of an old-style country Club of the 1950s. The course opened in 1957 and once served as the site of the Citrus Open. PGA Tour stars who played there inluded Arnold Palmer, Julius Boros, Lee Trevino, Hale Irwin and Jerry Heard.

Winding through houses of the same vintage, Rio Pinar features plenty of water and plenty of mature trees, enough of them that missing the fairway requires a fair measure of shot-making. With lots of shade to cut the Florida heat, I found Rio Pinar an unpretentious delight when I played it in 2017.

Its $40 greens fee for 2018 will go soft on your wallet, and the down-home friendliness of the staff went a long way toward making me want to go back.

A long Drive but Worth It 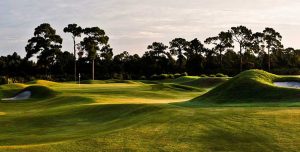 About two hours south down the Florida Turnpike is PGA Village in Port St. Lucie, where the three marquee golf courses, the Dye, Wanamaker and Ryder courses have been joined by a nearby property, St. Lucie Trail Golf Club, now operated under the auspices of PGA Village.

For those not familiar, PGA Village is a multi-course property operated by the PGA of America. It serves as a de facto retirement community for PGA pros from all over the country.

There are many golf towns in Florida, but none quite like Port St. Lucie, with a thriving community of different age groups. While the demographic does skew toward silver-haired, the dining is superb, with plenty of fresh seafood and a strong splash of international cuisine.

While each of the original PGA Village courses – Wanamaker, Ryder and Dye – has been renovated to keep pace with modern technology, the course that has really shown since its renovation has been the Dye Course. 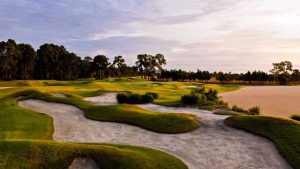 The greens were restored to Dye's original vision. Bunkers were redone with pure white beach sand, and fairways, collars and greens were regrassed with a dizzying array of turf grasses, each with a specific strength, such as drought tolerance or shade resistance.

The result is a feast for the eyes, painted in various shades of green, highlighted by the wrinkles and contours and plentiful bunkering – all of which can make you forget that it lies of ironing board-flat, palm-lined terrain. Putting is straightforward, provided you recognize the effect of the grain of the Tif-eagle Bermuda on putts.

Superintendent Dick Gray, in a round table discussion with reporters last year, said he was intimidated when he got the job to renovate Dye's work, which had fallen into a sad state of disrepair, with grass growing in bunkers and poor maintenance exacerbating drainage problems.

The two men had met when Gray worked decades earlier at Crooked Stick, another Dye design in Carmel, Ind. Upon contacting Dye and explaining that he had been charged with restoring the course, Gray said Dye welcomed him and offered guidance throughout the project.

Gray's success with the Dye renovation project undoubtedly led to his selection as the 2016 Superintendent of the year last February.

A round at the Dye course with cart and range balls through January varies from $97 to $139, with most prime tee times already taken, according to the club's reservations engine. Stay-and-play packages are available through the nearby Hilton Garden Inn and there is a boatload of condos in the community available for rent for buddies' groups.

Tucson Golf: Winter Golf without Spending Too Much Green 17751

Phoenix’s West Valley Gets a Winner with Victory Club 4439