(ALBUQUERQUE, N.M.) March 7, 2012 — GolfWeek magazine has ranked Paa-ko Ridge Golf Club the top course in New Mexico for 2012, according to its March 9 issue.

A long-time resident of the top 10 list, the Inn of the Mountain Gods in Mescalero, near Ruidoso, has has been dropped by the magazine's raters.

Here's the spring aerification and top-dressing schedule in and around Albuquerque and Santa Fe. New Mexico Tech Golf Course in Socorro just completed their top-dressing and aerifying:

The UNM Lobo Women's Golf Team will hold a free golf clinic for women March 24 at the UNM Championship Golf Course. Clubs will be provided for those who need them. No preregistration is necessary.

The clinic will be conducted by the Lobo women's squad and Assistant Golf Coach Becky Dover and will be tailored to both avid and beginning golfers. The event runs from 9 a.m. to noon.

Isleta Eagle Golf Club now has in-cart GPS. The system is the same as used at Sandia Golf Club, except the monitor is mounted from the roof of the cart, not on the cart dashboard, said Isleta Director of Golf Mike Ciolek. Isleta's green fee is $50 on weekdays, $65 on weekends, which includes cart.

Tucson Golf: Winter Golf without Spending Too Much Green 18289

Phoenix’s West Valley Gets a Winner with Victory Club 4934 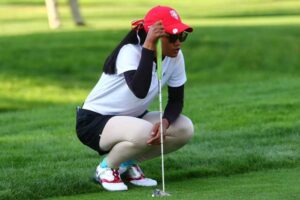