Guy Wimberly: A 5-mile Walk with a 30-pound Pack

The Benefits of Walking a Golf Course

I read an article recently where golfers were walking and, by the way, carrying their golf bag. Yes, this actually happens. There were others putting their golf clubs on a push or pull cart and walking. 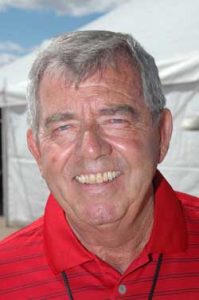 There was a time when people didn’t consider golf a sport but a simple walk in the park. You don’t beat up on someone, you don’t throw a ball at a moving target and the ball isn’t even moving when you hit it. So what’s the big deal?

Back in the good old days of college, I gave a speech on how healthy it was for one to play a round of golf, not only physically but mentally as well. I started the speech by talking about the equipment used.

There are 14 clubs in a set, I’d tell people, with the clubs averaging about a pound a piece. Add in the weight of the golf bag, a few extra balls, a windbreaker, water bottle, umbrella, etc., and that comes to, say, 16 pounds. With the clubs that would be 30 pounds.

Zig-zagging Around the Course

Add a fudge factor of 15 percent to account for the fact that no one (save for you and me, of course) ever walks in a straight line down the center of the fairway to the hole, but zigs and zags to follow their ball, plus walking around the green, scoping out putts, walking around and climbing out of bunkers. That gives you another 0.67 miles.

Total that up and you have a little more than five miles carrying what amounts to a 30-pound pack if there’s a bag slung over your shoulder.

As my friend, Ron Mannon at the Jungle Gym in Elephant Butte, said, “That’s like picking up a 30-pound rock, carrying it a 300 yards or so, setting it down a minute or two and picking it up again.”

My math says that would be moving 1,890 pounds – again while walking five-plus miles. That seems a pretty healthy situation to me, especially when you are soaking up Vitamin D.

But then, along came the motorized golf cart. Their popularity has certainly increased in the past 50 years as there are over 25 million golfers in the country which, of course, isn’t bad for the economy.

Health-wise, yes, I would say there has been a decline in the number of walking golfers, but we must concede, too, the motorized cart has helped allow those who are physically impaired a means of continuing to play the game. Certainly, the motorized cart has shortened the time it takes to play a round, which gets more people on the course.

Still, you are swinging the club’s weight around, walking for periods of time and taking in the sun. Besides if you weigh 200-plus pounds, moving that weight around for a few hours doesn’t hurt and you might lose a little flab during the round.

Mentally, golf may be one of the demanding of games. You have a lot of time “to think” between shots. You are the sole master of your swing, the judge of hundreds of types of shots to hit, the speed of putts, the angles into a green.

When the swing itself begins, you alone will make it work or not. There is no one who can help. It’s just you, that little white ball and one of those clubs in that 30-pound bag.