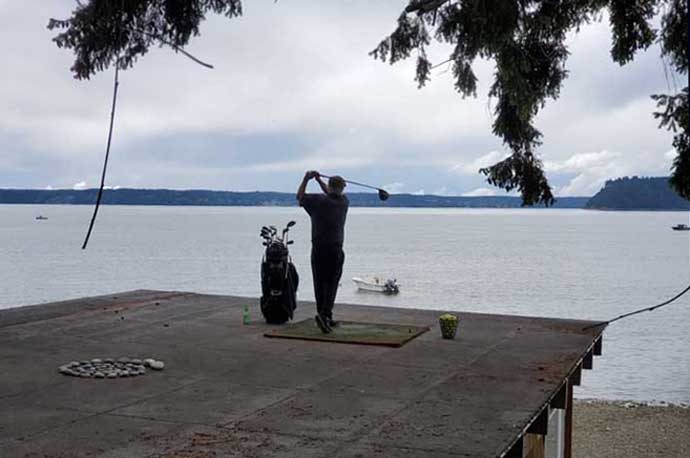 I survived the 2020 pandemic and quarantine thanks to a couple hundred retired range balls and my rooftop driving range.

I retired a few years ago to a small beachfront cabin on Puget Sound in Washington State. During the day, I would golf, not every day, but enough. At night, I would stay home and feed my dogs.

When there was talk of closing golf down, even though the weather was bleak, I rushed out into the cold breeze and played as much golf as I could.

Gov. Jay Inslee said no golf. I played my country club course over and over in my mind. I once read that a World War II POW did that and when he came home from the war his handicap dropped by eight strokes.

The mind trick got boring though. On ebay, I bought a 600 used golf balls delivered to my door for $205.

My seldom-used rooftop driving range was now being used every day. I was still frustrated. I have never been a range rat. During low tide, I would lay out a short par three and two modest par fours.  Just three holes with improvised flags. If practicing off beach sand was good enough for Seve Ballesteros, it was good enough for me.

Still, I was frustrated and desperate. A flight out of the state was not going to work because California, New Mexico and Arizona were also shut down. Oregon was open but it was a three-hour drive away.

My golf buddy Jake was also frustrated. We cooked up a plan to hit our country club course early one morning and then quietly play the back nine. We knew the busybodies that live in the houses lining the fairways would probably snitch us out, but we forged ahead. Yep, a complaint was called in and the club pro told us that all would be forgiven so long as we didn't try that stunt again.

Jake said he had heard about a real nine-hole golf course that was “open.” Off we went for the 30 minute drive to Overlook Golf course in Mt. Vernon. The sign on the club house door said they were closed. The cart barn was locked up. But on the first tee box there was a small metal container, if you wanted to make a contribution, then you could play the course, no questions asked.

We felt a bit guilty about breaking the quarantine, but desperate men will do desperate things.

We played fast and hard. The greens were shaggy. No flags. No problem, just shoot for the middle of the green. In reality that's the best way to play anyway. The course was an easy walk but with many side hill lies. No scorecards but we weren't keeping score anyway.  We had a tailgate beer at the end of the round and drove home happy.

What I would call an “open” nine-hole course satisfied the golf addiction once a week. Finally, and not a moment too soon, the re-opening date was upon us. We golfed at our country club, the greens were perfect and the rough was U.S. Open length. However, golf at the club now has a few more “rules.”

Don’t touch anything that you do not own. Don’t expect the clubhouse bar or grill to be open. Don’t dare to do a high five. No worries, all is well and Tiger beat Brady.

The three-hole beach course is no more. However, Jake and I are working on plans to go back to the nine-hole Overlook course just to laugh about our Cool Hand Luke days as escaped quarantine convicts.

Tucson Golf: Winter Golf without Spending Too Much Green 17350

Phoenix’s West Valley Gets a Winner with Victory Club 4101