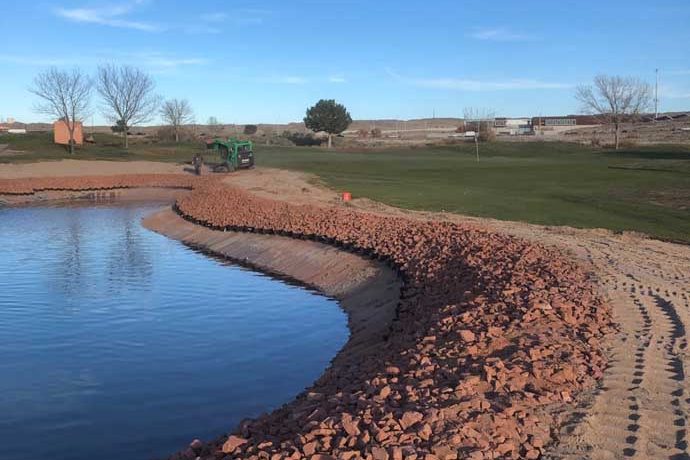 The par 3 6th hole at Isleta Eagle Golf Club has a new look, thanks to renovation of the hole's pond, which started life back in the 1990s as a 50-yard-long bunker.

The hole, at the far southern edge of the Isleta Eagle Golf Club, plays 170-208 yards.

“It had been a large bunker, about 50 yards long, but the maintenance costs of keeping it up were too high. So we turned it into a lake, but it just didn’t fit properly and we were having trouble with the lining. So we decided to redo the lake from scratch.”

“To get the water level correct the club had to raise the lower end up, which created a worse look,” said Jeremie Smith of Pro Turf, who oversaw the project.  “One of our jobs on that hole was to figure out a way to blend in the lower end to create a more natural look while keeping the water at the correct level.”

In other New Mexico golf news:

Membership for the 2019 season of the Sun Country Junior Golf program is now open. Boys and girls compete in the following age groups: 7-9, 10-12, 13-15 and 16-18. A $45 membership gets the player a handicap, eligibility to all Sun Country Junior Tour events, a copy of the Rules of Golf, a golf hat and membership in the Youth on Course program, which offers its members discounted golf in 25 courses in New Mexico and West Texas. The Junior Tour has more than 30 events around the state and runs from late May through July.

Jason White, general manager of the New Mexico State University Golf Course, is the new president of the Sun Country PGA Section. He succeeds Pat Gavin, head of the Professional Golf Management program at NMSU. Matt Long, director of golf at Sandia Golf Club is the new vice-president. Tom Yost of the First Tee of San Juan Country, is the new secretary.

Kempter. who has competed in UNM Championship Golf Course and Santa Ana Golf Club men's events for decades, writes that he's moving to be closer to his daughters.

“We are headed to Stockbridge, Ga., to get closer to our kids,” he wrote to New Mexico Golf News. “Our youngest (Victoria) lives in Atlanta and works for Delta Airlines. Katie is living in Jupiter, Fla., and is working at Admirals Cove. She is going to start working on her [PGA of America} Class A pretty soon.

“We have bought a house at the Eagles Landing Country Club and will enjoy the golf course in our back yard,” he said.

Katie Kempter won $111,270 on the LPGA Tour and Symetra Futures Tour over nine seasons. Her last start was last July at the Fuccillo Kia Classic of New York, where finished T30.

If you have golf news, send it to Editor Dan Vukelich

Golf Course MaintenanceIsleta Eagle Golf Club
Previous ArticleHow to Make 18 on a HoleNext ArticleJohn Smoltz Followed The Masters While Pitching a No-hitter
newmexicogolfnews
Dan Vukelich, former editor of ABQ Free Press and Sun Country Golf magazine, is editor of NewMexicoGolfNews.com. He is a member of the Golf Writers Association of America and the Golf Travel Writers of America. Reach him at [email protected]

Tucson Golf: Winter Golf without Spending Too Much Green 16778

Phoenix’s West Valley Gets a Winner with Victory Club 3580