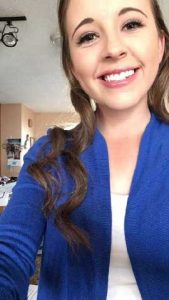 Jacquelyn Galloway, one of the best junior golfers New Mexico has ever produced, sees golf as a portal to higher education rather than as a career option.

Both of Galloway’s parents are teachers who emphasize the importance of school. Hitting the road for high-level competitions every summer turned her away from considering a professional golf life.

She says the pressure to play well is intense, especially for someone whose income depends would on her performance.

“It’s not as glitzy as everyone assumes a professional sport is,” the soon-to-be Cleveland High School senior says. “It’s traveling week in and week out, constantly trying to make the cut.”

Starting Monday, the 18-year-old Galloway competes in three national junior competitions back to back. She spoke to New Mexico Golf News by phone while on her way to the 72-hole Girls Junior PGA Championship at the Kearney Hill Golf Links in Lexington, Ken.

After Kentucky, she heads to California for the USGA’s 72-hole U.S. Girls Junior Championship, which starts July 16 at Poppy Hills Golf Course in Pebble Beach, then to Colorado for the Girls Junior Americas Cup, a 54-hole team event that starts on July 23 at Hiwan Golf Club in Evergreen, Colo.

While junior golf life is less travel-intensive, Galloway says competing is still mentally and physically exhausting. She describes golf as a rollercoaster, and she says teenage growing pains that cause insecurity or just having a bad week can affect performance. The stress of competition season can even mean forgetting proper nutrition.

Another challenge she faces is sometimes having unrealistic expectations. She competes against the best international golfers at her level but says she can still be hard on herself for making mistakes. She’s a perfectionist that strives for high achievement and when it doesn’t happen, she gets frustrated, she says.

One of her coaches, Daniel Woodrow, says when Galloway is defeated she doesn’t brood, but re-focuses quickly to work on her game. He says she stood out against other golfers to one college recruiter not for how well she played, but for her dedication.

“She was on the driving range when the other golfers were on their cell phones,” he says.

Woodrow says Galloway doesn’t just hit as many golf balls as she can and hope for the best like a lot of other golfers do during practice, but instead she practices for a specific purpose.

Golf as a Path to College

Galloway was the New Mexico state 6A high school individual champion in 2017 and 2018. In 2015 she finished second to her sister, Dominique, but beat her to take the top individual spot in 2016.

This May, Jacquelyn Galloway won the Shootout in the Desert, an invitational competition among the best junior golfers in New Mexico and West Texas that was held at the Canyon Club at Four Hills.

Her stellar junior golf career won Galloway a scholarship to her college of choice. She’s committed to University of Iowa for 2019. She plans to study biomedical engineering and says the school has a top-notch research hospital. She wants to go into a career in healthcare to help people, she says. 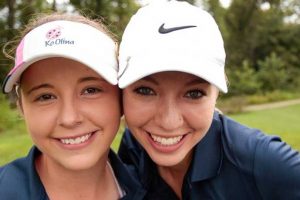 She’ll play golf in college and says she thinks her team has a shot at an NCAA championship. But after college, she just wants to play recreationally. “I don’t want to burn myself out to where I pick up the club and can’t even enjoy it,” she says.

She says golf has taught her a lot about herself and, through light-hearted competition, it brought her closer to her sister, Dominique, who preceded her at Cleveland.

Dominque, now a college sophomore, went to the University of Texas to play golf but after a semester she transferred to New Mexico State University and now plays for the Aggies. Jacquelyn considers her sister more of a mentor than an opponent.

This story was corrected to correct the identities of Galloway’s teammates on the New Mexico/Sun Country Girls Junior Americas Cup team competing in Evergreen, Colo., starting on July 23.

Sara MacNeil is a freelance journalist who previously worked as a staff reporter for ABQ Free Press.