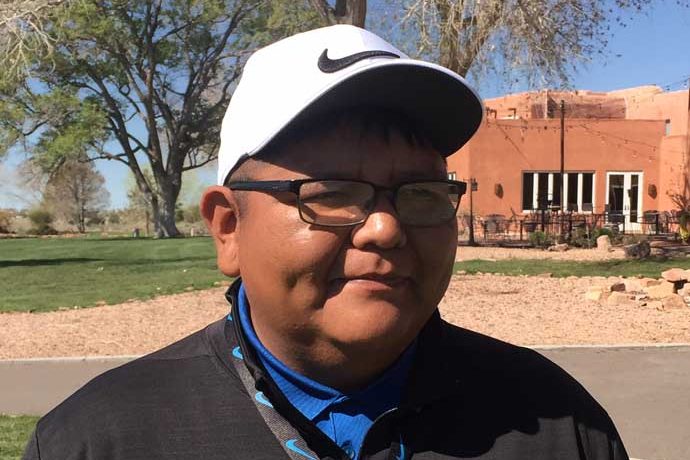 PGA professional Jason Montoya is a man on a mission – too lose as much weight as possible to be able to keep up with the junior golfers he teaches and coaches.

The 33-year-old Santa Ana Pueblo native, the first full-blooded Native American to become a member of the PGA of America when he joined in 2012, is sharing his quest with his followers on Twitter.

“My biggest motivation is to be able to keep up with my junior golfers,” said the 2010 University of Nevada Las Vegas graduate. “I know it's going to take time.”

Montoya knows the stakes. His mother and aunt are diabetic and he's been diagnosed as pre-diabetic. Losing weight is helping him return to an active lifestyle, given him more energy and improved his golf game.

Jason Montoya: Doing it for the Kids

The walking is important. As coach of the golf teams at Albuquerque Academy, he used to perch himself on a high point to take in the action from afar during tournaments. Now he can walk along with his players and do what coaches do.

The kids at Santa Ana's Golf Academy and at his own EleVate Golf Mind Body golf clinics are part of it. “The word ‘body' in that name gives me a lot of motivation, he said.

“At my biggest it was hard for me to walk nine holes or even our short course, and I got winded just talking to people,” he said.

A start was stretching and exercise, which has become part of his morning routine. He adopted a dramatically altered diet that has cut out sugar, energy drinks, and carbohydrates like bread and beer. “Stopping the Arnold Palmers was tough,” he said.

All that has been replaced by vegetable-rich smoothies that include kale, spinach, ginger, green apples and avocados. Drinking a lot of water helps, he said.

He now counts calories and pays attention to the caloric values listed on restaurant menus. His goal is 2,500 calories a day on days he expects to walk a lot, such as during Sun Country Amateur Golf Association or Rocky Mountain Junior Tour events.

“I told my buddies it's not really a diet when you turn it into part of your daily life and make it routine,” he said.

The quest, as he calls it, also involves a shift in self-image.

“I was always a big kid. It was in my head being the biggest person – so I'm judging myself as hard as anyone judges me,” he said. “My family and friends support me and they're encouraging me to eat healthier.”

“I don't have a time frame or a particular weight goal,” he said. ” I'm just trying to better myself.”