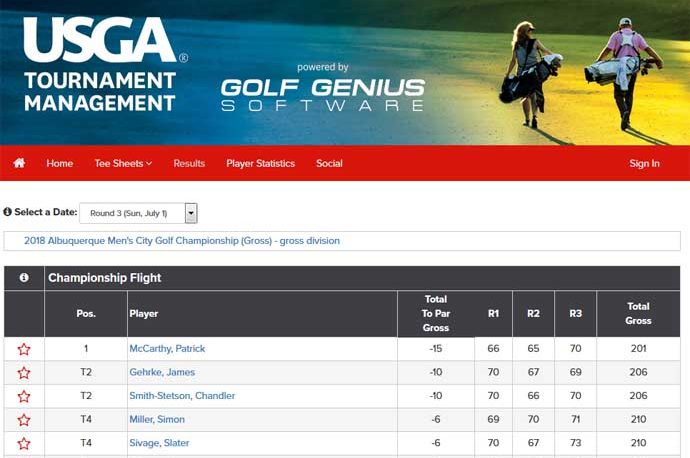 Patrick McCarthy shot a bogey-free 2-under-par-70 in the closing round post an easy five-shot victory for his second straight title in the Greater Albuquerque City Mens Championship.

James Gehrke closed with a 69 and Chandler Smith-Stetson had a 70 to tie for second and 11 under in the 54-hole event.

“It was a lot different this year,” said McCarthy, a 20-year-old graduate of St. Pius High who will be a junior at Missouri Western State in the fall. “I just played steady and solid and was able to protect the lead. I didn’t really think about how anyone else on the course was doing.

“I think winning last year really helped. But I was glad I didn’t need another finish like that to win”.

Last year, McCarthy drained a 20-foot birdie putt on the final hole for a one-shot victory in the City Mens Championship over two others. This year, he led from the start, shooting a 6-under-par 66 in Friday’s opening round at Ladera and firing a 7-under-65 on Saturday at Los Altos to take a five-shot lead into the final round.

Gehrke, playing one group in front of McCarthy, entered the final round seven shots back but closed to within three after a 33 on the front nine on Sunday,

“But I started to struggle a little bit on the back nine, and missed three straight greens. I got up-and-down on all three, but could never make a run.” said Gehrke, 29.

McCarthy, who won three college tournaments this past season, has worked at Arroyo del Oso for seven years. The event’s Mark “Ticky” Smith Trophy — engraved with winner of every tournament since it was first held in 1941 — was moved from Los Altos to Arroyo after McCarthy’s victory last year.

“I don’t know,” McCarthy said with a grin, when asked if the trophy will remain at Arroyo. “I sure hope so. It’s a great feeling to see it there, and to see all the names on it.”

Steven A. Tapia won the President's flight with a three-day total of 6-over, two shots better than Dominic J. Sanchez.