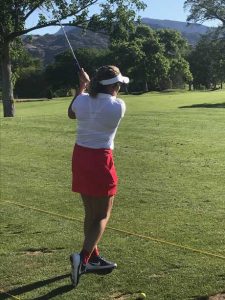 Zamarripa finished strong in Round 2, making three birdies in the final six holes and posting a 1-over 73.

Zamarripa, a 16-year-old who will be a junior in the fall, posted a two-day score of 6-over at the Canyon Club at Four Hills May 13-14, to finish four strokes ahead of Galloway.

Three things you should know about Sophia Zamarripa: She’s a weightlifter who can clean-and-jerk 123 pounds and she wants to be an orthodontist.

“It was a gorgeous day both days,” said Sophia Zamarripa, who carded scores of 77 and 73 under sunny skies with little wind.

“I was in disbelief,”  she told KRQE-TV Channel 13 shortly after her win.

“I couldn’t believe it. It’s just I’ve wanted it so badly this whole season, and just knowing that I finally accomplished it is just awesome. It’s just a really good feeling.”

Zamarripa has played golf since age 10. She hopes to play Division I or II NCAA golf in college. Although it’s too soon to shop for schools, her skills likely will be looked at by potential coaches as early as this summer.

Zamarripa’s Game, Not Score is Her Focus

Both Sophia Zamarripa and her coach at Sandia, Rich McConnell, attribute her state championship win to focus. Unaware of where she stood in relation to Galloway, Zamarripa concentrated on her own game. She made three birdies in her final six holes. Her upset win turned back Galloway her bid for a fourth consecutive 5A girls golf title.

“I was not expecting to win,” she told KRQE. “I just wanted to play solid golf whether I won or not.”

In fact, her preference while on the course is not to know where she stands against the field. “I didn’t want to know how she [Galloway] played,” she said. I just focus on my own game, not even on my own score.”

She carries a 4-handicap index and a 4.025 grade-point average, which is above a perfect 4.0. She’s been a member of the Key Club. Recently, in a team-building exercise, she and a group of other students cooked for 200 Sandia students over two days.

Her inspiration and the reason she wants to be an orthodontist is, in fact, her own orthodontist who became a mentor as she was growing up.

Her strength as a golfer is her distance off the tee, which allows her to hit wedges into most par-4 greens while competitors are hitting mid- and long irons. “I can dial in my wedges,” she said. Her weaknesses lie in her long irons and putting, both of which she is working on, she said.