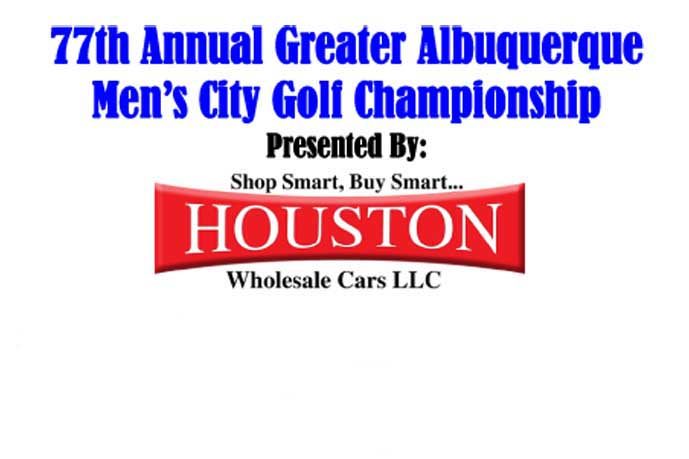 The Mens City Golf Championship will be contested June 29, June 30 and July 1 on all three of Albuquerque's 18-hole courses: Ladera, Los Altos and Arroyo del Oso.

There will be a cut after 36 holes to the top 50 percent of the field plus ties.

The event is open to all male golfers who live or work in the greater Albuquerque area.

The three-day event is sponsored by Houston Wholesale Cars.

There will be net flights in the Mens City Golf Championship, with those flights determined by the actual spread of handicaps of the entrants. Players will be allowed a maximum handicap of 18.0 for the tournament. Exceptional scores below a player's stated handicap that are posted during the tournament will be adjusted by the tournament director.

Colby Reddoch, director of the Mens City Golf Championship, said the first 156 entrants will be guaranteed a spot in the field.

Cost for the event is $180, which covers greens fees, range balls, cart and lunch. Payment is by check made out to Los Altos Golf Course of LAGC. Deadline for entry is June 26. Here's a link to the Mens City Golf Championship entry form.

Previous ArticleLieberwirth Takes Section’s Mazek MatchesNext ArticleWNMU Grad in Hunt at U.S. Open
newmexicogolfnews
Dan Vukelich, former editor of ABQ Free Press and Sun Country Golf magazine, is editor of NewMexicoGolfNews.com. He is a member of the Golf Writers Association of America and the Golf Travel Writers of America. Reach him at [email protected]

Tucson Golf: Winter Golf without Spending Too Much Green 17326

Phoenix’s West Valley Gets a Winner with Victory Club 4077