If you’ve got a spare week for a golf getaway this summer, consider playing in the Myrtle Beach World Amateur Handicap Championship, perhaps the world’s biggest golf tournament.

Three thousand amateur golfers, sorted into 70 flights by age and USGA handicap, play four rounds on four courses selected from among dozens of area golf courses participating in the event. It’s basically THE golf event for Myrtle Beach each year. 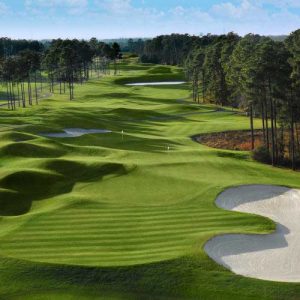 The winners plus all T1s from each individual handicap flight are then pitted against one another in a final round to determine the capo de tutti capi of all amateurs.

Last August, Curtis Henley, of Poquoson, Va., shot an 82 for a net 66 in the fifth-round playoff to win the overall title.

This year’s event is Aug. 27-30, with early check-in on Aug. 25 and 26. The final playoff to crown the ultimate champion from among thel individual flight winners will be held on Aug. 31.

Each night, participants are welcome to partake in what’s billed as the World’s Largest 19th Hole, which features live bands, dancing, a golf expo, food and drinks and pocket billiards and chipping contests. The Golf Channel will be on hand..

Cost for the event is $525 for all golf, heavy hors d’ouvres and drinks each night at the 19th Hole, a gift bag, gift card, and a continental breakfast at the course each morning.

My fellow Golf Travel Writers of America member, Len Ziehm, formerly of the Chicago Sun-Times, participated in the 2017 edition of the Myrtle Beach World Amateur Handicap Championship and wrote about it on his blog, Len Ziehm on Golf.

.It’s definitely a competition, but it also has the friendly touches of an outing as well. The Myrtle Beach World Amateur Handicap Championship is golf event like no other. 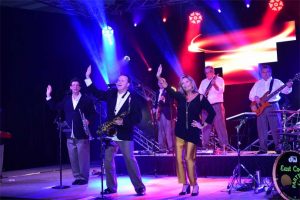 With over 3,000 playing in the same community at the same time, a case could be made that it’s the biggest of all golf championships. Though it receives very little media attention, even within its golf-crazed community, the event has endured for 34 years and continues to show steady growth. The latest staging drew 3,010 players — ranging in age from 18 to 89 –from every state except Alaska as well as 22 countries….

The World’s Largest 19th Hole was clearly that. This was a lot different than your usual pro-am party. Each night there was dancing to the music of live bands, a golf expo that included 60 exhibitors, on-stage programs featuring celebrities from The Golf Channel, putting and chipping contests, billiards matches, youth games and – best of all – food stations offering small portions of the cuisine served at the area’s top restaurants. Oh, yes, there were open bars at various locations each night as well…. 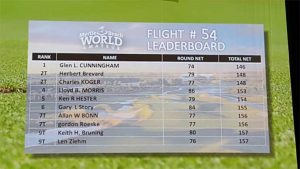 EPILOG: I’ve played in tons of golf events, but none like this one. The Myrtle Beach World Amateur Handicap Championship is for serious, recreational players. All putts must be holed out. There’s no picking up your ball at frustrating times and moving on to the next hole. You obviously need to keep a handicap to participate and must accept the likelihood that some scores will be higher than you’re used to shooting. You should have a sense of humor if you’re thinking of playing in the 2018 World Amateur next August.