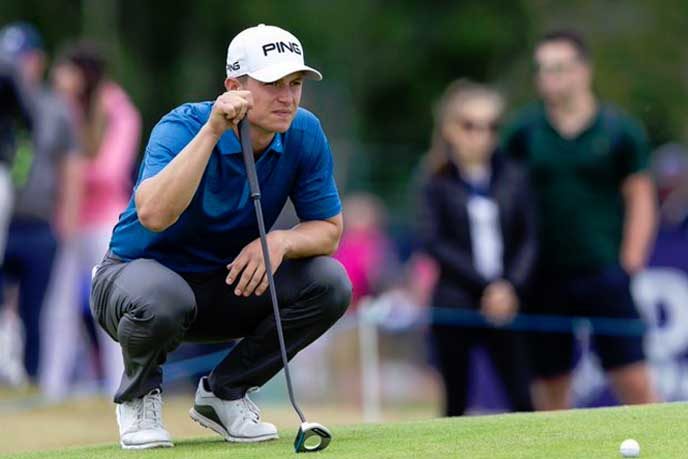 Western New Mexico alum Calum Hill has won twice this year on the European Challenge Tour, the equivalent of the PGA Tour's Korn Ferry Tour (formerly the Web.com Tour), and he's fared well in most of his four starts on the European Tour since the summer.

While in New Mexico, Hill won the San Juan Open and the Arizona Open in 2017, and he played all four windy days in the 2018 U.S. Open at Shinnecock Hills in New York.

This season on the European Challenge Tour, Calum Hill, a native of Kirkcaldy, Scotland, won the Euram Bank Open in Ramsau, Austria at 22-under in August. He won the Made in Denmark Open in Skanderborg, Denmark at 18-under in July.

His Challenge Tour performance earned him starts on the European Tour. He finished T26, two shots ahead of Rory McIlroy, at the Aberdeen Standard Investments Scottish Open in July. He finished T17 at the Spanish Open earlier this month, and he finished T7 at the Alfred Dunhill Links Championship at the end of September.

University of New Mexico Lobo alumni Madalitso Muthiya of Zambia, James Erkenbeck and Sam Saunders of Albuquerque made it through the first stage of European Tour's Q School in Óbidos, Portugal last Saturday.

The European Q School that Saunders, Erkenbeck and Muthiya are trying to get through comprises three stages. It started in September and runs through early November and is played across 252 holes.

The top 25 players and ties earn their European Tour cards for the following season. The final stage consists of a grueling six-round test. This year, the three stages are being held at venues in Austria, England, France, Germany, Italy, Portugal, Spain and Sweden.

The second stage for Saunders, Erkenbeck and Muthiya will be held on Nov. 7-10 on one of four courses in Spain. The final stage will be held Nov. 15-20 at Lumine Golf Club, Tarragona, Spain.

As its 2019 season comes to an end at the end of this month, Paa-Ko Ridge Golf Club is deep into a renovation, with its pro shop and restaurant operating out of a temporary building as the 19-year-old facilities get upgrades and are expanded.

The course itself is immaculate, thanks to upgrades by two Wall Street turnaround experts who bought the course from the Roger Cox Company in the spring of 2018. Work on cottages and a lodge to house out-of-town visitors is expected to begin next year. Cox had planned and even developed architectural plans such amenities, but the real estate collapse of 2008-2009 put the lodging on hold.

According to its developers, the Sheep Ranch was for years a mysterious golf landscape just north of Bandon Dunes Golf Resort. Located on Five Mile Point, and originally designed by Tom Doak in 2001 while he worked on Pacific Dunes, the property will be renovated for full public use in conjunction with the adjacent Bandon Dunes property.

With a mile of ocean frontage, nine green sites overlooking the Pacific Ocean, and with ocean views on every hole, the Sheep Ranch will continue the legacy of Bandon Dunes developers Phil Friedmann and Mike Keiser of “Golf As It Was Meant to Be.”

GOLF.com's Anonymous Junior Golfer Survey found that one in five elite junior players has cheated in a competition. The magazine polled 64 competitive junior boys and girls players ages 12-18 from four different regions of the country and 20 percent admitted they have knowingly broken a rule in a tournament and not reported it. One respondent said that he or she had “put a club firmly on the rough to get a better lie.” The juniors were also asked if they had ever confronted or reported another player for breaking a rule. Sixty-nine percent said they had, the magazine reported.