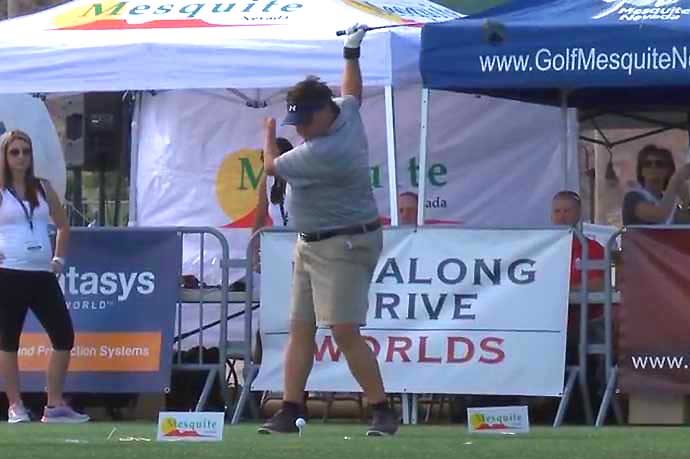 ‘Golf is something you can always get better at'

Bobby Baca was so close. The one-arm golfer got his handicap index down to 7.1 in June, low enough to play in the USGA's U.S. Senior Amateur Championship qualifier earlier this month at Paa-Ko Ridge Golf Club. Then disaster struck.

Baca, 55, of Albuquerque, entered the Albuquerque City Men's Golf Championship and made a mess of things over two days in early July. His handicap shot up to 7.8, above the USGA's 7.4 limit. Had he entered the Senior Am qualifier earlier and taken a pass on the city men's, he would have been allowed to play.

For the intensely goal-oriented player, who had already reached the zenith of one-arm golf competition, losing the chance to compete against able-bodied golfers in a high-level event was a huge disappointment.

Born without a left hand, Baca, an engineer at Sandia National Laboratories, competed for 26 years on the professional racquetball circuit before a knee injury ended his career. Looking for an athletic endeavor to take its place, he settled on golf, which he had tried as a kid but never pursued.

Once he tried it in earnest, he fell in love.

The Drive to Compete

“I love the mental aspect of competing,” he said. “I have a knack for it and when I'm competing it's like a switch is turned on.”

With racquetball out of his life, he threw himself into golf and joined a league at Sandia. His handicap index started in the 30s and for awhile he was his team's D player. As he practiced and got better, his index came down.

Two years into his new sport, a city worker he knew mentioned that a three-day national amputee golf event was coming to Albuquerque. As a one-arm golfer, he was eligible, his friend told him. He nagged Baca until he finally agreed to enter.

Although he performed so-so, “The competition got to me and I really wanted to start improving,” he said.

Later, he competed in a one-arm event in New Jersey. “Those guys were good,” he said. “I thought, ‘Look what I can become.'”

After returning home, he stepped up the practice and signed up for lessons with a local golf professional, but the relationship didn't work out. “He tried to make me a two-handed golfer,” he said. “The experience taught me that I had to figure it own on my own.”

If some people are gym rats, Baca is a range rat. What came next was years of relentless practice. He sometimes practiced as many as eight days out of 10. He made huge strides with the quality of his full swing but chipping remained a mystery.

By email, he contacted Jim Flick, a nationally known golf instructor, whose advice was, “Make your biggest weakness your strength.”

Over the years, Baca skill as a one-arm golfer took him to the top.

He was selected to the U.S. team in the Fightmaster Cup, a fully sponsored Ryder Cup-style event in which the best one-arm golfers from the North America compete against their counterparts from the United Kingdom. Baca competed in Wales in 2008 and again in Kentucky in 2010.

But then his goal changed.

“I became the best one-arm golfer and I set my sights on competing against golfers with two hands,” he said.

He got serious about his clubs, went looking for a good set and contacted Ping. His prominence as a one-arm golfer led Ping Golf to invite him to the company's Arizona R&D facility for a day-long fitting session. They tailored a set of irons and woods to his swing. “They arrived two days later, boxes of irons and woods,” he said.

Over the years, Baca has progressed through the company's G series from G2s to the G30 line. He goes back to Phoenix year after year to get refitted, he said.

Most recently, Baca enrolled in the Golf Tec swing-analysis and lesson program. In the swing bays of Golf Tec's indoor range at 419 Mountain Rd. NW, he can see instant video replays of his swing and analyze data on ball flight and spin rates.

Working with Golf Tec's director of instruction, Kevin Amhaus, the program has gotten his spin rate down, resulting in longer drives. He periodically has playing lessons with Monty Mills, a Golf Tec instructor.

While the USGA Senior Am qualifier may have slipped threw his fingers this year, his goal remains — to win an able-bodied golf tournament. Once again, he's stepped up his practice and playing regimen.

His most recent handicap record at GHIN.com shows he's played 44 rounds this year, 14 of them in tournament play. During golf season he'll play twice a week and practice three times a week, he said.

You can see Baca's swing at the 8-minute mark of this video of the Paralong Drive World Cup competition in Mesquite, Nev.

Tucson Golf: Winter Golf without Spending Too Much Green 17329

Phoenix’s West Valley Gets a Winner with Victory Club 4080