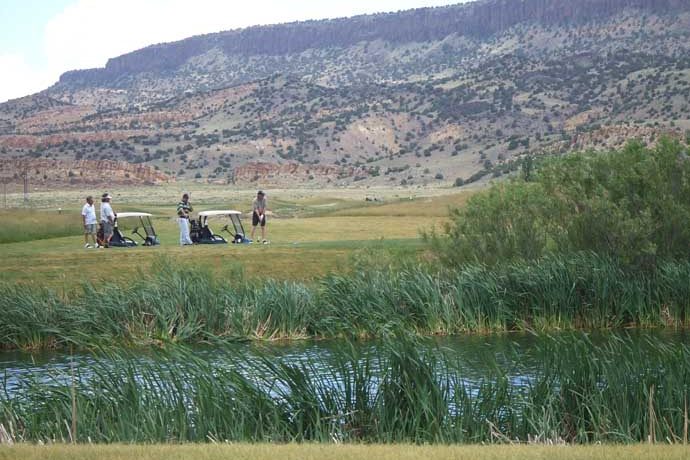 It appears a bid this week to “go rogue” by the City of Grants, its golf course and the Grants mayor ended as soon as it began.

The town's mayor, Martin “Modey” Hicks, on Monday defied Gov. Michelle Ljuan Grisham's order to remain on lockdown. He opened up City Hall and the city's golf course. Four other businesses followed suit. But New Mexico State Police quickly showed up and with the threat of a $5,000 fine shut everything down.

The city's 18-hole course, Coyote del Malpais, presumably was closed. It was not answering its phone during business hours on Tuesday. The mayor did not return an email from New Mexico Golf News seeking comment.

“The governor is killing the state over a little bug,” Hicks said Monday, as quoted by Golf.com, which ran the story under the headline, “Why one rogue golf course is defying governor’s coronavirus closures.”

The governor was adamant.

“This notion that you don’t have to comply is wrong. That you can just open up businesses and not worry about public health issues is really quite frankly tantamount to opening up a public pool and having a pee section,” Lujan Grisham said late last week.

According to KOAT-TV Channel 7, that did not stop Hicks. He rushed to the golf course, told all of the golfers who were coming off to get back on and finish their games.

According to KOAT, he said, “What's wrong? Social distancing, guys, get a shot of that,”while holding his arms up and walking towards a wide open golf course. “How is that for social distancing.”

“I am going to come back and golf today for sure and haven’t golfed in years.”

All of the state's courses are closed, including tribal courses that by law are not bound to follow orders from Santa Fe.

The state's golf industry has been working with Lt. Howie Morales to position golf to be among the first outdoor activities allowed to reopen when the governor amends her stay-at-home order. Several golf sources said Hicks' rebellion didn't help things.

Tucson Golf: Winter Golf without Spending Too Much Green 17350

Phoenix’s West Valley Gets a Winner with Victory Club 4101