Golfers who transit the open nine holes of Albuquerque's beleaguered 18-hole course at Ladera Golf Course might be shocked, shocked, at a long-awaited sight on the other side of the ropes — grass.

All signs are that the City of Albuquerque has finally gotten serious about saving the West Side's only municipal golf course. 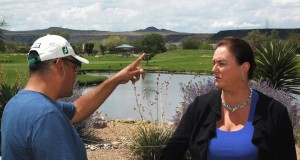 Four miles of new cart paths are almost done. Earth-moving equipment is active across the course. Seed is germinating. Salty water issues have been addressed. Best of all, the poisonous, almost purposeful incompetence among former maintenance people that crippled Ladera for more than a decade appears to be history.

City Chief Administrative Officer Rob Perry may not know anything about golf, but he apparently recognized a looming financial and political embarrassment earlier this year when he finally set eyes on the disaster known as Ladera.

Key to the turnaround is Rex Saddoris, the new on-the-ground superintendent at Ladera. Saddoris was hired by Golf Division Superintendent David Salas to get his hands dirty, knees muddy, whip his crew into shape to fix what needs to be fixed. Saddoris, a returning New Mexican, is an experienced superintendent with expertise in poor soil conditions.

Until the latest surge, we were this close to printing up tee-shirts emblazoned with this quote from former Ladera golfer and golf activist Jeff Breitner: “I don't play golf, I play at Ladera.”

Salas expects to finish the front nine renovation by fall, open both nines through winter, then close the back nine for renovation by about March. In another four or five weeks, after the new turf on the front nine has matured, its fairways will be sand-dressed to rid them of kidney-busting bumps that make riding in a golf cart painful.

After more than $2 million in irrigation improvements, plus another $750,000 for re-seeding and cart path improvements,  the hallmarks of Ladera — mud bogs, dust bowls, dust-strangled fairways and crumbling carts paths — may be a thing of the past.

We can only hope that when the city ATM stops dispensing emergency cash at Ladera, the course will remain playable. And that will be up to Salas, Saddoris, the people running the mowers.