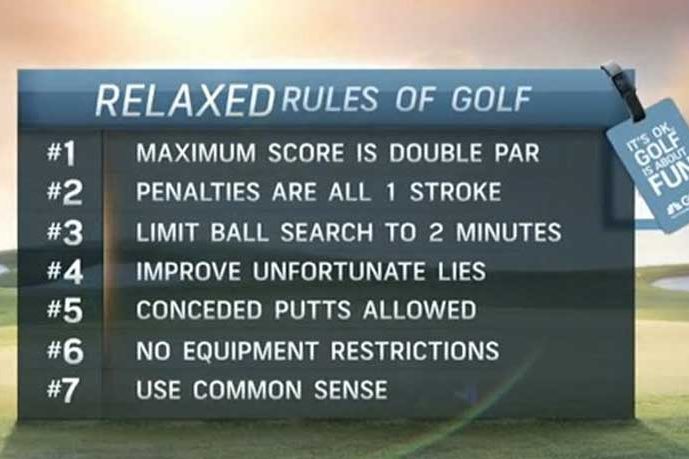 Rules of Golf for Seniors Can Speed Play, Lower Scores

Retired Albuquerque Journal sportswriter Dennis Latta and his golf cronies in Lake Wales, Fla., sent us these proposed changes to the Rules of Golf for Seniors 60 and older.

Their Rules of Golf for Seniors appear to both lower scores and speed up play, although it's highly unlikely the USGA would sanction the proposed changes.

That being said, here they are:

Rule 9.k.34(a) – If a tree is between the ball and the hole, and the tree is deemed to be younger than the player, then the ball can be moved without penalty. This is so because this is simply a question of timing; when the player was younger, the tree was not there so the player is being penalized because of his age.

Rule 1.a.5 – A ball sliced or hooked into the rough shall be lifted and placed on the fairway at a point equal to the distance it carried or rolled into the rough with no penalty. The senior player should not be penalized for tall grass which ground keepers fail to mow.

Rule 2.d.6 (b) – A ball hitting a tree shall be deemed NOT to have hit the tree.  This is simply bad luck and luck has no place in a scientific game. The senior player must estimate the distance the ball would have traveled if it had not hit the tree, and play the ball from there.

Rule 3.b.3(g) – There shall be no such thing as a lost ball. The missing ball is on or near the course and will eventually be found and pocketed by someone else, thereby making it a stolen ball. The senior player is not to compound the felony by charging himself with a penalty.

Rule 4.c.7(h) – If a putt passes over a hole without dropping, it is deemed to have dropped. The Law of Gravity supersedes the Rules of Golf.

Rule 5 – Putts that stop close enough to the cup that they could be blown in, may be blown in. This does not apply to balls more than three inches from the hole. No one wants to make a mockery of the game.

Rule 6.a.9(k) – There is no penalty for so-called “out of bounds.” Had penny-pinching golf course owners simply bought sufficient land, this would not occur. The senior player deserves an apology, not a penalty.

Rule 7.g.15(z) – There is no penalty for a ball in a water hazard, as golf balls should float. Senior players should not be penalized for shortcomings of the manufacturers.

Rule 8.k.9(s) – While advertisements claim that golf scores can be improved by purchasing new golf equipment, this is financially impractical for many senior players. One-half stroke per hole may be subtracted by players using old equipment.

Please advise all your senior friends of these important porposed rules changes, which apparently are already in effect in Lake Wales, Fla. Latta's crew advises, “Keep multiple copies in your golf bag. Those not following the rules need to be provided a copy. Golf is, above all, a game of integrity.”

In a post last year, New Mexico Golf News laid out nine scenarios in which the actual Rules of Golf can actually help a player.