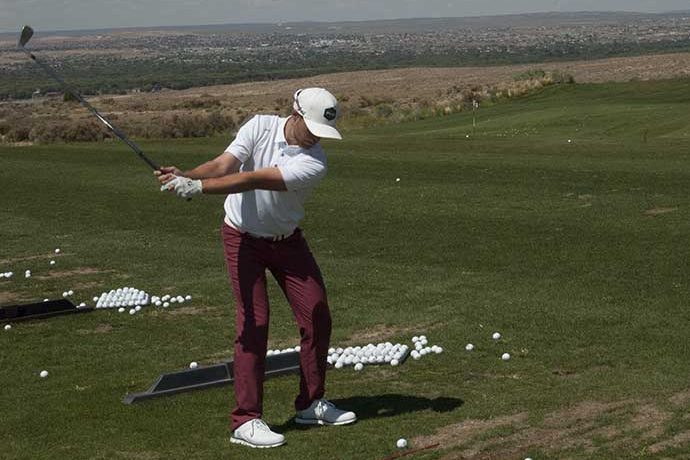 For Sam Saunders, winner of the 2018 New Mexico Open, competing on the LatinoAmerica Tour has been a wild and woolly way to see the world, but it’s time to move on.

Hitting a new town in Mexico, South America or the Caribbean every few weeks has involved scrambling from venue to venue on puddle jumpers with the ever-present threat that players or their golf bags might be offloaded to allow the plane to take off safely.

A bag being booted from the plane at the last moment means the loss of a practice round and a diminished chance of winning, which means another hiccup in making it to the PGA Tour more elusive.

Accommodations on the LatinoAmerica Tour are often AirBnBs or the spare room of a friend of a friend. The traveling LatinoAmerica players hang together as they move from to and from places like Lima, Peru, Santiago, Chile and Mazatlan, Mexico. Sometimes, someone will hear about a house being available and 10 guys will pile into six bedrooms, Saunders said.

“There’s great camaraderie, better than any tour I’ve played on,” he said. “Down there, you see a guy and you know that we’re all going to the same place.”

“We look after one another.”

Saunders, 26, a graduate of La Cueva High School and the University of New Mexico, won the New Mexico Open last week in a three-hole playoff with Jeff Burton of Scottsdale, a player on the Dakotas Tour. The New Mexico win doesn’t get him any closer to the PGA Tour but it did put a much-needed check of about $14,000 in his bank account.

“I’ve always wanted to take a week and play at home and win my state open,” he said. In winning it at Sandia Golf Club, Saunders joins winners of New Mexico’s most prestigious event that include Lee Trevino, Paul Stankowski, Notah Begay III and Rich Beem.

sam Saundersl lives in Albuquerque and travels 30 weeks a year, often with former Lobo teammate Victor Perez. “I know a little Spanish, enough to order or ask directions or order at a restaurant,” he said.

As foreign as the LatinoAmerica Tour may be to U.S. players, it’s relative benign compared to the differences in language, the vast distances involved and the culture of the developmental tour in China. “I’m heard some crazy things about the China tour,” he said.

For a kid who grew up in the Northeast Heights, it’s been a kick to be able to play professional golf with a shot of making it to the big tour, Saunders said.

“I’m humbled and blessed to be an American and able to travel the world and play golf and see kids pick up the game,” he said. At the same time, traveling throughout South and Central America, he’s seen how much of the world lives in poverty.

Until recently, Saunders hadn’t been playing well. He did poorly on the LatinoAmerica Tour, making the cut in only three of his last 15 events. His best finish was and a T25 finish for $1,339 in winnings a ranking of 122nd on the Latino TourAmerica’s Order of Merit.

The LatinoAmerica Tour has nine more events this season but Saunders won’t be going back. He’s opting instead to head to Europe to try to qualify for the European Tour.

There, he’ll try to make it through a single qualifier. This is the last year before that tour moves to a multi-stage qualifier like the Web.com Tour. Because there is no college golf in Europe, he feels his odds are better there.

“I want to learn and get a little better, but the PGA Tour is where I want to be.”

Rio Rancho’s Tim Madigan, a former winner of the New Mexico Open, finished in 8th place, shooting 69-64-68-65 in the Freedom Financial Championship in London, Ontario. The event is the final stage of Canada’s MacKenzie Tour’s 2019 qualifier.

Finishing that high gives Madigan fully exempt status on the MacKenzie Tour next year and entry into the second stage of the three-stage qualifying for the Web.com Tour, where he previously played.