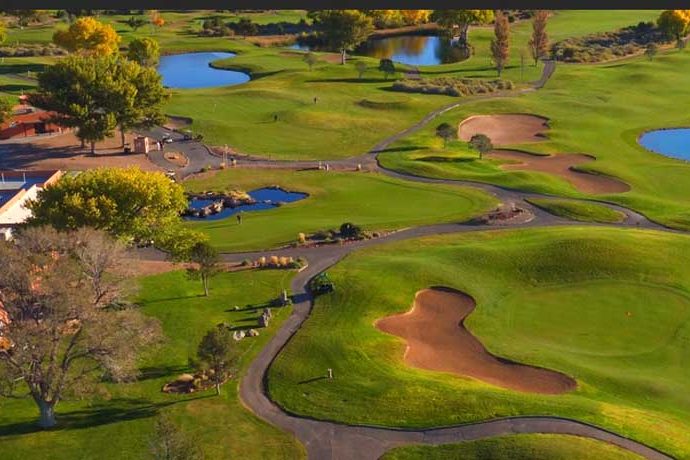 Walk-ons are being discouraged. The range will be closed and the Wind Dancer Grill will serve a limited menu of takeout items.

Players are asked to depart promptly after their round.

The chipping green will be open to players with a scheduled tee time.

Only one rider will be permitted in a cart. Cart riders will be asked to load and unload their own clubs on the cart.

Santa Ana Golf Club, among the top-rated Albuquerque, New Mexico golf courses, is one of two  courses operated by Santa Ana Pueblo. Twin Warriors Golf Club, Santa Ana’s sister course, has not announced a reopening date but it is expected to be open by the end of June.

The Hyatt Regency Tamaya Resort and Spa, a top New Mexico golf resort, announced it will be reopening for guests on June 29 with reduced rates for New Mexico residents.

To take advantage of the special reopening rate for locals only, go online to hyatt.com or call (888) 591-1234 and mention Special Offer Code LOCAL1 to access the $115 per night rate, plus a nightly resort fee.

Previous ArticleQuail Hollow to Host 2025 PGA ChampionshipNext ArticleAlcohol Back on Courses, but with Restrictions

Tucson Golf: Winter Golf without Spending Too Much Green 19743