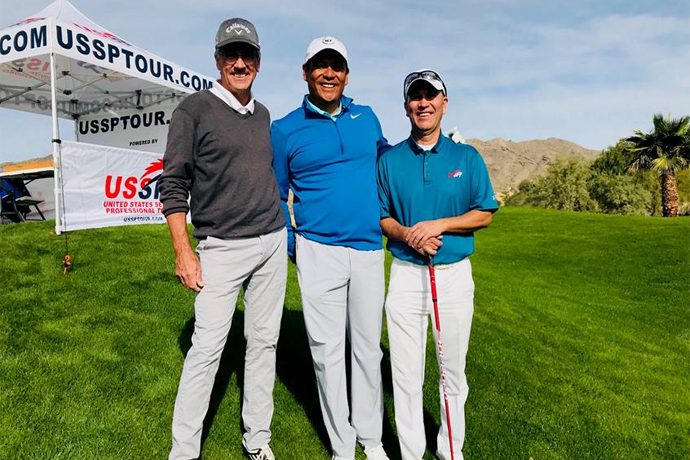 The tour is the brainchild of Daniel Nuñez, director of golf at the Inn of the Mountain Gods resort in Mescalero, N.M., who a few years ago wondered why Florida was the only place older pros not on the PGA Tour’s Champions Tour could compete professionally.

“When I turned 50, I traveled and played in several events in Florida in the winter and did not like the greens at that time of the year,” Nuñez said. “I did not get much out of the experience.”

That led to a brainstorming session with friend and former tour player Mark Saxton of Lovington, and the U.S. Senior Professional Golf Tour was born. In the tour's debut season in 2013-2014, Saxton’s company, Lovington Warehouses, put up $8,000 for the purse.

The tour is for professional golfers and scratch amateur players 45 and older. The list of competitors is a who’s who of senior golfers with New Mexico ties, including Kent Jones, Rich Beem, Sean Murphy, Ronnie Black and Notah Begay III, who became eligible when he turned 45 last September.

Jones, a former UNM Lobo golfer, dominated the USSPTour until he graduated to the Champions Tour, where he made $115,545 in official money in 2017.

The Web.com Tour for the Champions Tour

In its early days, membership was sparse, with fewer than 20 members and an average of 12-18 players per event, Nuñez told freelance writer Vinnie Manginelli. Slowly, the tour expanded beyond New Mexico into Oklahoma, Texas and Arizona. By the end of the 2015-2016 season, the U.S. Senior Professional Tour had grown to 45 members.

“Our mission then became to become the Web.com tour for the Champions Tour,” Nuñez said. “Our next move will be to start charters of the United States Senior Professional Tour around the country,” he said.

The 2017 season culminated with the tour’s first national event, held at Club West in Phoenix. The Inter Tribal Golf Association, a group organized to promote Native American-owned courses, put up the $15,000 toward the purse.

Players join the USSPT tour for $500 and pay $250 to enter each event, said Ron Allen, a member of the tour’s board.

The first of ten events scheduled for 2018 was held in Jan. 7-8 at Painted Dunes Golf Club in El Paso. Nuñez took home the $1,100 winner’s check with a 36-hole score of one over after a weekend that saw winds gusting to 40 miles an hour.

This weekend, an event at Black Jack’s Crossing at Lajitas Resort in Terlingua, Texas, will feature an $8,200 purse, with $1,200 going to the winner. The season wraps up with two events in the Phoenix area in December, although the venues are still to be determined.

The full schedule of 2018 events and current membership of the U.S. Senior Professional Tour is at ussptour.com.

professional golf
Previous ArticleWhat’s His Hole-in-one Secret?Next ArticleNew Golf Writer at Journal
Dan Vukelich
Dan Vukelich, former editor of ABQ Free Press and Sun Country Golf magazine, is editor of NewMexicoGolfNews.com. He is a member of the Golf Writers Association of America and the Golf Travel Writers of America. Reach him at [email protected]

Tucson Golf: Winter Golf without Spending Too Much Green 17359

Phoenix’s West Valley Gets a Winner with Victory Club 4111