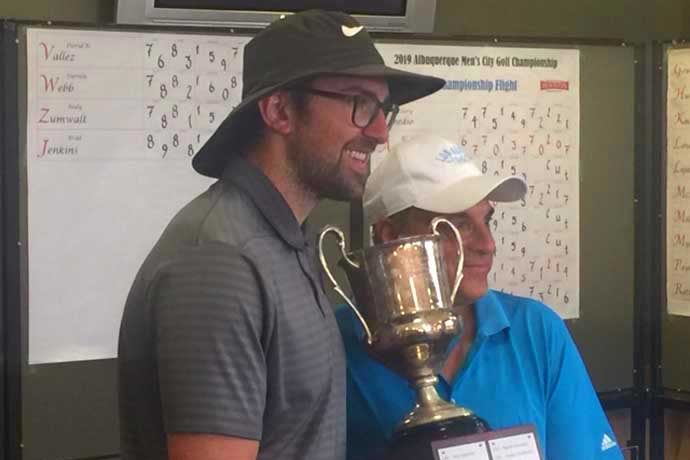 Dreamed of Winning the Event Since Age 14

Simon Miller, a 26-year-old state budget analyst, pulled away from the field to take the 2019 Greater Albuquerque Men's Golf Championship Sunday at Los Altos Golf Course. He posted scores of 68-68-67 as the event was held across all three 18-hole city golf courses over three days.

Simon Miller finished four strokes ahead of Alejandro Armijo, 19, who finished  at 9-under. Armijo had started the day one shot behind Miller. Armijo posted rounds of 67-70-70.

“I really felt the nerves,” Miller said. “I knew Alejandro was a really good player.”

“I was trying to keep my emotions in check,” he said.

Miller, a graduate of Albuquerque Academy, said he has dreamed of winning the event since he first played in it at age 14.

He holed out a flop shot on No. 14 as he cruised to victory in the final round. “I gave my caddie a high five and think I hurt his hand,” he said.

The win was a contrast to Miller's showing at the Sun Country Amateur Golf Association's New Mexico-West Texas Amateur Championship at Paa-Ko Ridge Golf Club two weeks ago, where he wasn't competitive, posting scores of 77-78-83.

Miller said he was more confident on the wide open Los Altos layout, where instead of likely playing a provisional at the hilly and forested Paa-Ko, he expected to be able to find an errant tee shot and play from a dirt lie. “Precise, that's not really my game,” he said.

Miller said his full-time state job makes him a 9-to-5 worker who can't get away to play as much as he'd like. He said he'll play in as many area amateur events as he can going forward, work permitting.