The insanity at the City of Albuquerque’s Ladera Golf Course must stop. Two million dollars later in irrigation improvements, the place looks more like a dog run than a golf course. It’s time someone got fired.

The first hole is so bad, it has been closed to play – and this after first one nine, then the other nine, was closed for months to speed installation of irrigation improvements.

Vast stretches of fairway are devoid of any desirable plant life. Weeds are about the only thing growing. Trees are dying. Irrigation heads reputed to be state of the art are creating standing pools of water and mud bogs, while turf dies just yards away.

How the concessionaires at Ladera, Sam and Wright Zimmerly, who own West Side Golf, have managed to hang on while city workers destroy the golf course is anyone’s guess. Sadly, all this is happening following completion of a $2 million irrigation system paid for by city general obligation bonds. 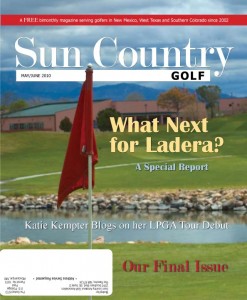 The craziest part is that the golf course actually is worse shape than it was before the new water-saving irrigation system was installed. There have been excuses, some good: a windy, cold, dry winter, lots of winter kill, lack of water during construction, the inability to aerify, and on and on. Players at Ladera have been patient, but slowly, they are moving on. The city is out of excuses. Ladera is a wreck.

We have a citywide golf superintendent who turned things around at Los Altos a few years ago, but Ladera seems to devour reputations, resources, money and good will. On the ground, little has changed there since 2010, when Sun Country Golf magazine exposed the incompetence of the maintenance crew at Ladera.

Click here to see pages from the magazine’s farewell issue, which aimed a spotlight on Ladera’s woes back then. The package of articles could have been written this month.

It’s hard to fire city incompetent or insubordinate workers, but the crew at Ladera should be scattered across the city’s Parks and Recreation Department. They personally and their collective bad attitudes should never to be allowed to reconstitute – anywhere.

Superintendents, parks heads, even mayors come and go, but the same people who were destroying Ladera years ago appear to be still at it.

Just three weeks ago, I saw a maintenance worker spreading chemicals on fairways drive a tractor over steel tee markers on No. 6, forcing them so hard into the ground they were difficult to pry loose. It harkens back to eyewitness accounts in past years of mowers willfully being driven over metal tee markers. No wonder Ladera’s equipment is a mess.

Several months ago, the crew, on orders from no one, decided to clear all vegetation from native areas of rough. The denuding destroyed habitat for quail and rabbits. It also created a dust bowl effect that led wind-driven dust to migrate to fairways, suffocating grass and burying new irrigation heads. Neighbors surrounding Ladera wondered why silt was piling up on their porches and blowing into their living rooms.

The new irrigation system, so sophisticated that heads can be individually controlled, is worthless if the heads themselves are broken and go unrepaired. There is significant evidence from watering patterns that the crew at Ladera doesn’t know how the new system is supposed to operate.

Last year, David Salas, head of the city golf courses, brought Scott Lewis to Ladera from Sandia Golf Club, but Lewis was doomed by inexperience and an inability to deal with a cabal of maintenance workers who helped run off not one but two of Salas’ predecessors in the last five years. Lewis never had a chance.

Salas, who’s being told by his Parks and Rec bosses to leave the greens-keeping to others and concentrate on administration and saving money?

His boss, Barbara Baca, whose department oversaw the bidding and execution of the irrigation contract and who can now claim ownership of the worst golf course this side of Carrizozo?

Chief Administrative Officer Rob Perry, who runs the day-to-day operations of city government and to whom Baca reports?

Or maybe Mayor Richard Berry himself, who held several news conferences at Ladera to tout his commitment to golf value at municipal courses?

The next time the mayor holds a news conference out at Ladera, he should send a press aide out to the golf course first to make sure there’s actually a green backdrop for the cameras. Because at the rate things are going, there won’t be.