Streamsong: Worth the Drive

The Black Course is a Rollercoaster, While Blue is Old-School Golf at its Best

The late winter wind here in New Mexico is howling today, which means so much for trying to sneak in a quick 18 today, or even going to the range.

That got me to thinking, where have I been recently and where I’d like to be right now. 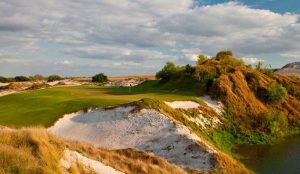 I’ve been fortunate enough to pay two of Steamsong’s three courses. I’ve not yet played Streamsong Red, which is No. 10 on Golf magazine’s Top 100 You Can Play List.

The trio of Streamsong courses is, by anyone’s account, in the middle of nowhere. The resort is a good 29 miles from Lakeland, Fla., which itself is about an hour southwest of Orlando or roughly halfway to Tampa. But once you reach the resort, which is  built on the remains of an old phosphate mining operation, you realize it’s worth the drive.

Walking is Mandatory at Streamsong

During the cold months up north, walking is mandatory at Streamsong. Rates for players who aren’t guests of the resort vary from $125 to $275 depending on season. While you can walk with a pull cart, forecaddies or caddies are advisable.

While some golfers may squawk about the hike, the resort sums up its walking-only philosophy this way: 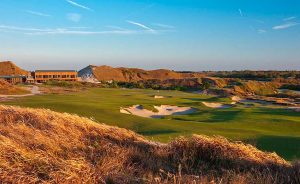 “Although carts are available, we believe that the limited visibility, noise and distractions of riding in a cart are all factors that contribute to an inferior golfing experience. When you’re in a cart, you may still be able to see the courses from the tees and your approaches from the greens, but ultimately, the experience in between is lost.”

Streamsong Blue is No. 14 on Golf’s 2016-2017 best-public-courses list (it’s No. 24 on Golf Digest’s 2018 list). It’s what website builders call WYSIWYG, or “What You See is What You Get.” It’s a straight-forward 2012 effort by Tom Doak. It has no hidden gimmicks. It’s just old-school golf that requires solid approach shots and a deft short game.

There are few forced carries. Fairway bunker are large and generally shallow. Picking a line to a bunker you can’t reach – a tried and true method of playing Tom Doak courses – serves you well on the Blue course. Fairways are generous, meaning you really have to shank it to end up off the course.

The day I played the Blue course, my game, sadly, was somewhere else. Bad swings and bad decision-making led me to pick up on more holes than I’d care to admit. But playing badly gave me more time to marvel at the contours and dunes that made me think the Irish Sea might be just over the next rise.

Thanks to its undulating greens, playing the Blue course requires real thought on where your approach shot should land. This is where your caddie or forecaddie really earns his money. 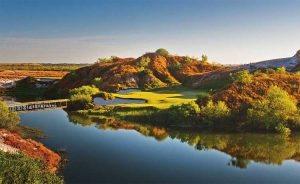 On the 7th, a par 3 over water,  my tee shot came up just short of the green at the 6 o’clock position. Our forecaddie gave me two possible lines to a middle left pin. He warned, though, that taking the aggressive line on the downhill putt could send my ball off the green. Of course, instead of lagging safely down to within three feet of the hole, I took the aggressive line. Not really surprised, I watched helplessly as my ball trundled off the green and down a set of wooden steps to an unplayable lie.

The Blue course’s greens were running about 10 and a half the day we played. Time and again, chips and putts that looked like they’d stop close to the hole kept going and going and going. Thanks to elevated, mounded greens they frequently came to rest 20 to 30 yards from the flagstick.

If the Blue course is a well-paved four-lane U.S. highway through the mountains, figuratively speaking, Streamsong’s Black course is a high-speed two-laner with switchbacks and death-defying descents.

Opened in the fall of 2017, Gil Hanse’s Black course is memorable for wild greens that can leave you with 100-foot-plus putts with two and even three breaks. 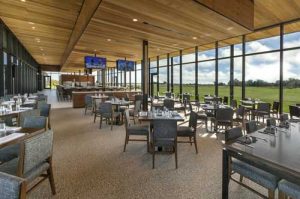 Thanks to Hanse’s use of Bermuda ultra-dwarf mini verde, his greens blend seamlessly into the surrounding terrain, making them appear even more massive than their average 8,000 square feet (which already is two to almost three times larger than your typical 3,000-square-foot green).

How tricky are the greens? The following is either a summation of the difficulty of the Black course’s greens or a testament to my poor putting – or maybe even both.

On the 139-yard Par 3 15th hole, I put my tee shot squarely in the middle of the green, leaving myself about 30 feet, but with a hog’s back ridge and a double break between me and the hole. On the other side of the hog’s back was a big-swinging downhill putt. My first putt came up short of cresting the hog’s back and rolled away from the hole. The second went long and the third came up short, caught a ridge and broke hard away from the hole. One of my playing partner gave me the five-foot putt to avoid the ignominy of a five-putt, double-par 6. 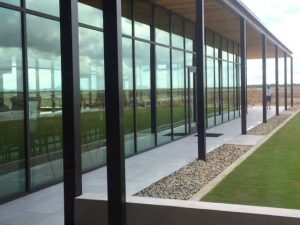 While I struck the ball well on the day I played the Black course, Hanse’s greens dealt me a cruel final blow on the 18th, a downhill par 5.

My second shot caught a slope that fed my ball into a bunker right of the fairway. That left a 150-yard shot partly over water and more bunkers to an elevated green. I pured a 7-iron and landed the ball pin-high right of the flag.

As my caddie and fellow players yelled “golf shot,” I hoisted myself out of the bunker, handed the rake to my caddie and looked for my ball, which was nowhere to be seen. It had rolled, not spun, I was told, into a bunker short of the green.

“Get me Gil Hanse’s phone number, now!” I shouted, knowing that I had been masterfully manipulated by a master golf architect. By the time I blasted out and two-putted for bogey, I knew I couldn’t wait to come back.

So true. I wish I had written that.